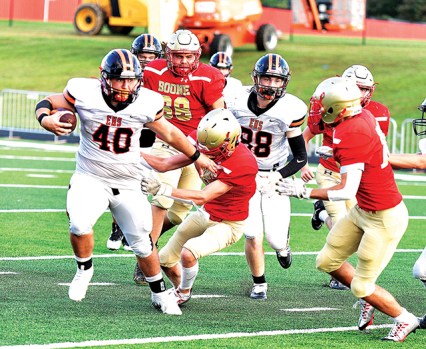 Star Photo/Ivan Sanders Jaiden (J Bird) Wallin throws off defenders like a rag doll on his way to a 28-yard pickup. 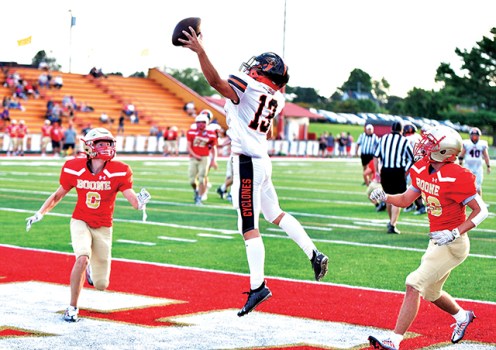 Star Photo/Ivan Sanders Bryson Rowland almost comes up with an ESPN highlight-reel catch against the Boone JV on Monday. 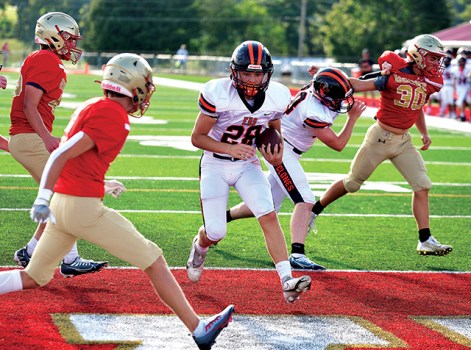 Star Photo/Ivan Sanders Justius Wallin carries the ball over the goal line for a Cyclone score. 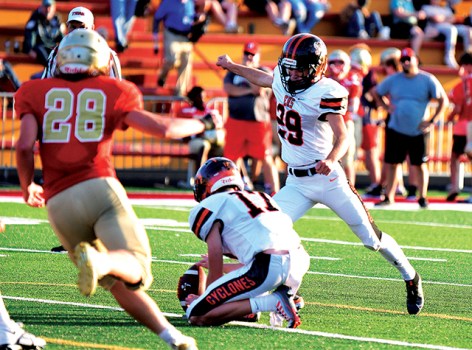 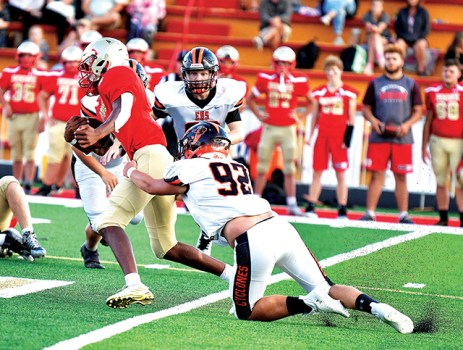 Star Photo/Ivan Sanders Sophomore defensive lineman Andrew Vance wraps up a Boone running back in the backfield for a loss. 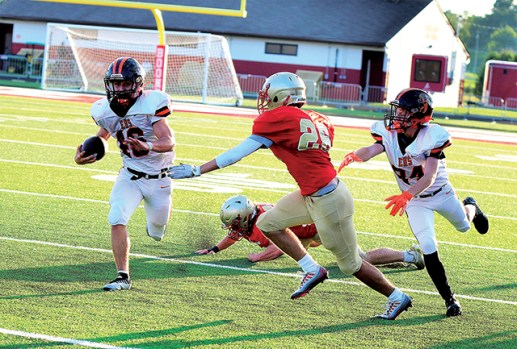 Star Photo/Ivan Sanders Maddox Lucas breaks off a large gain. He would later carry the ball 39 yards into the end zone for the final score of the game. 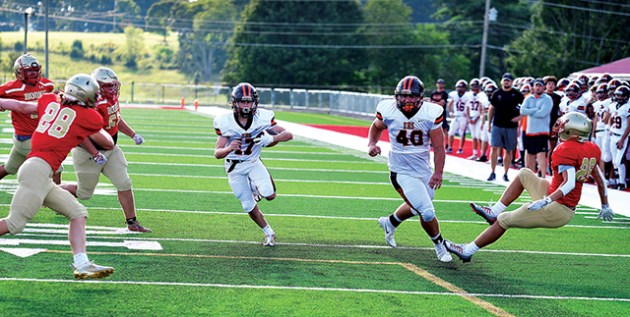 STAR CORRESPONDENT
GRAY – There was some rumbling around Ken Green Field on the campus of Daniel Boone High School on Monday but it wasn’t coming from any thunder or seismic activity from the fossil site.
Those rumblings came from Jaiden (J Bird) Wallin and the Elizabethton Cyclone JV team that ran over and through the Boone JV team for an impressive 30-0 victory in football action Monday evening.
Behind the strong running of the bruising freshman running back and inspired play from the entire Cyclone team, the Blazers didn’t stand a chance as the Cyclones took a 17-0 halftime edge and never looked back in the second half to take the win.
“It’s huge anytime you can get the monkey off your back and finally get the win no matter what level it is as it feels good to win and for these guys to experience some success is awesome,” said Cyclone JV head coach Brian Jenkins. “We just played fundamental football and didn’t try anything fancy. We kind of found a niche last week against Greeneville with J Bird and Justius (Wallin) in the backfield. Justin (Whitehead) has stepped in and played quarterback with the injury to Rhett (Slagle) and I thought he done very well considering the circumstances.”
It was actually a pair of Wallin’s that helped push the Cyclones ahead on the scoreboard as Justius Wallin burst over the goal line from five yards out to get the Cyclones rolling in the first quarter.
Caleb Campbell blasted the point-after attempt through the uprights and the Cyclones led 7-0.
The Cyclone defense was on task and got the football back for the offense with some time left on the first quarter clock. Behind the running of J Bird Walling who was throwing defenders off like blocking dummies, the Cyclones reached pay dirt once more with 30 seconds remaining in the opening quarter as Walling finished off his work with a one-yard run.
Campbell was true once again and at the end of the first quarter, the Cyclones led 14-0.
Elizabethton added a 28-yard field goal from Campbell with 5:24 remaining in the half to extend the lead to 17-0.
After a scoreless third quarter, the Cyclones picked right back up where they left off in the fourth quarter as quarterback Justin Whitehead found Justius Wallin on an 18-yard scoring toss to push the advantage to 23-0.
One of the most memorable events of the game came when Coach Jenkins sent senior Colin Nidiffer out to take care of the extra point and after a perfect snap, Nidiffer boomed the football through the uprights much to the delight of the Cyclone fans and team for a 24-0 lead.
“Colin does a little bit of everything – he manages, he kicks, he cheers with the cheerleaders, and he is trying to help us coach,” said Jenkins jokingly about the special moment. “He’s a great kid and you need kids like that in the program and it was great to see him get out there and get that first extra point and get in a couple of kickoffs. It was great to see his excitement out there.”
The score came with 9:10 remaining in the contest.
Elizabethton continued to put the pedal to the metal as Maddox Lucas took care of business on the final Cyclone drive covering the last 39 yards to the end zone to give the game its final margin as the point after failed giving the Cyclones the 30-0 victory.
The Cyclone JV will be back in action next Tuesday at Science Hill with a 6 p.m. scheduled kickoff.