On Wednesday, Aug. 31, officers of the Johnson City Police Department arrested Wayne Guinn, Elizabethton, and Laura Guinn, Hampton, on charges of hindering a secured creditor (over $10,000).
The arrests were the result of an investigation that began with Unaka Auto Sales reporting that they sold a vehicle to the Guinns and they stopped making payments approximately six months ago. The vehicle was recovered and returned to Unaka Auto Sales.
The Guinns were both arrested and transported to the Washington County Detention Center where they were held on a $1,000 bond. An arraignment was held Thursday, Sept. 1, in Washington County General Sessions Court.

On September 10, at approximately 10:45 p.m., officers of the Johnson City Police Department arrested Kaylie Vaughn, 23, Jonesborough, and charged her with driving on suspended license, evading arrest (to wit: felony), driving under the influence, and simple assault (to wit: first responder).
At approximately 10:45 p.m., officers were on routine patrol and observed a blue Toyota Rav4 swerving over the roadway on Interstate 26. Officers initiated a traffic stop and identified the driver as Kaylie Vaughn. During the traffic stop, Ms. Vaughn drove off from the traffic stop in her vehicle and later came to a stop at Interstate 26 and Bobby Hicks Highway.
Police arrested Vaughn and transported her to the Washington County Detention Center where she was held in lieu of a $12,000 bond. Arraignment was held September 12 in Washington County General Sessions Court.

On September 11, officers of the Johnson City Police Department arrested Jason Smith and Jamison Garrett, Johnson City, and charged them with felony possession of Schedule IV Xanax for resale.
At approximately 12:15 a.m., officers observed a red Ford Taurus occupied by two males parked behind a closed auto repair business. Due to the number of recent catalytic converter thefts, officers approached the vehicle and identified the driver as Jason Smith and the passenger as Jamison Garrett. After a police K-9 alerted on the vehicle, the officer conducted a search and located a black backpack in the back seat. In the backpack was a baggie of Xanax and four ledgers indicating drug sales. Both subjects were taken into custody.
Smith and Garrett are being held at the Washington County Detention Center in lieu of a $5,000 bond each. An arraignment was held September 12 in Washington County General Sessions Court.

On September 12, at 6:14 p.m., officers of the Johnson City Police Department arrested Raymond Greene, Johnson City, and charged him with felony reckless endangerment.
The arrest was the result of officers being dispatched to the area of Sleepy Hollow Lane on a report of shots being fired. During the investigation, it was conclusively determined that the shots were coming from a nearby residence. Officers made contact with the suspect, identified as Raymond Greene, and placed him into custody. Due to Greene shooting within the city limits, as well as the proximity to nearby residences, Greene is being charged with one count of felony reckless endangerment.
Greene was arrested and transported to the Washington County Detention Center. He is currently being held on a $5,000 bond. An arraignment was held September 13 in Washington County General Sessions Court.
On September 11, at 12:29 pm., officers of the Johnson City Police Department responded to a crash involving a motorcycle on Boones Creek Road near Browns Road. Upon arrival, officers discovered a 2008 Harley-Davidson motorcycle had been traveling east on Boones Creek Road, when it collided with a deer in the roadway. The driver of the motorcycle, Donald Newell of Johnson City, was transported to the Johnson City Medical Center, where he succumbed to his injuries.
The Johnson City Police Department Crash Reconstruction Team is continuing the investigation.

On September 13, officers of the Johnson City Police Department arrested Rodney Brown and Devante Childress, Johnson City. Brown was charged with being a convicted felon in possession of a firearm. Meanwhile, Childress was charged with manufacture, deliver, and sell of a controlled substance and possessing a firearm during commission/attempt to commit a dangerous felony.
On September 13, at approximately 2:29 a.m., officers were dispatched to check for shots fired in the area of University Parkway and W. State of Franklin Road. Upon arrival, officers located two males, matching the description given, hovering around a red Chevy Tahoe and a Nissan sedan. They were identified as Brown and Childress. A search was conducted on the Tahoe and officers located 128 grams of marijuana and a handgun. After searching the Nissan, a rifle and handgun were located. Investigation revealed the handgun in the Tahoe belonged to Brown. The marijuana, rifle and second handgun belonged to Childress. They were both taken into custody.
Brown and Childress are being held at the Washington County Detention Center in lieu of a $10,000 bond each. An arraignment was for September 14 in Washington County General Sessions Court. 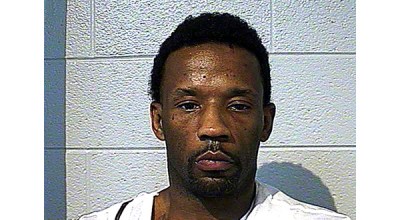