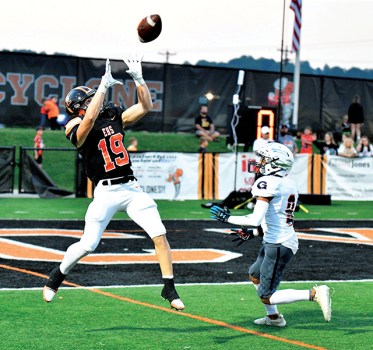 Star Photo/Ivan Sanders Cyclone senior wide receiver Teddy Orton is zeroed in on a pass from Dalton Mitchell that broke a 10-quarter scoreless streak for the Cyclones and set the tone for the first win of the season for Elizabethton. 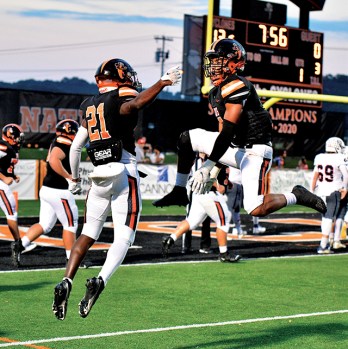 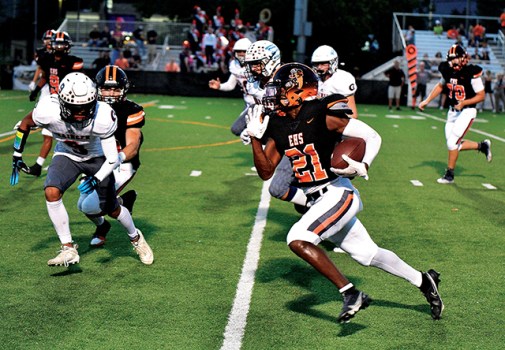 Star Photo/Ivan Sanders Nate Stephens breaks down the Cyclone sideline for a chunk of yardage. 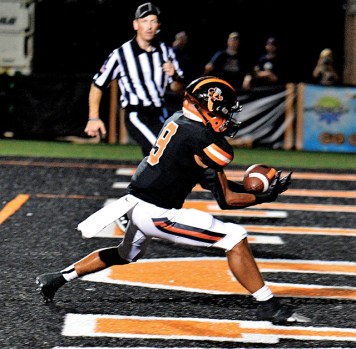 Star Photo/Ivan Sanders Jeriah Griffin corrals a pass in the end zone for a Cyclone touchdown. 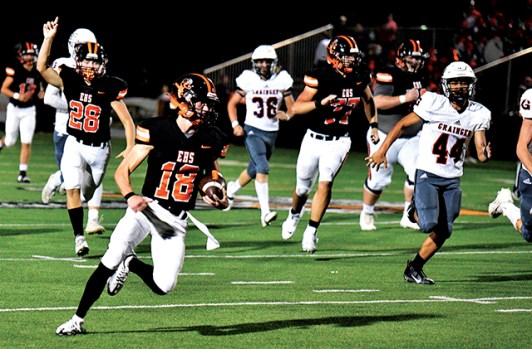 Star Photo/Ivan Sanders Dalton Mitchell turns the ball inside for a big gain after a reception. 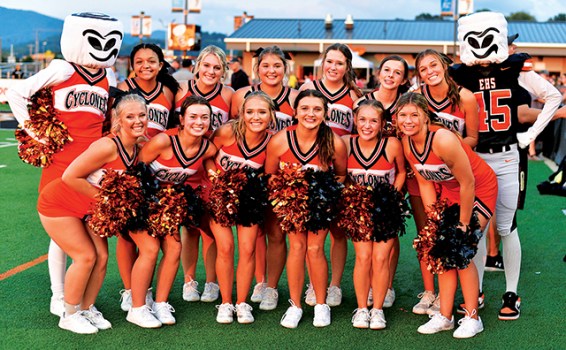 Star Photo/Ivan Sanders The Elizabethton Cyclone cheerleaders along with Stormie and Tuffy were ready to cheer their Cyclones on to victory.

STAR CORRESPONDENT
The Elizabethton Cyclones were on the hunt for their first win of the 2022 season on Friday at Citizens Bank Stadium when the Grizzlies from Grainger County came calling.
It didn’t take long for the Cyclones to have the visitors tucking their tail and running up a tree as the Cyclones had their ears pinned back and were after some bear hide as they took the Region 1 Class 4A showdown by a score of 47-0.
A 30-yard scoring toss from senior quarterback Dalton Mitchell to senior wide receiver Teddy Orton broke a long 10-quarter scoreless streak just 1:02 into the contest as Elizabethton went up 7-0 after Caleb Campbell’s point-after attempt was good.
The Cyclone defense continued to play superbly as they quickly got the ball back to their offense and once again it didn’t take long for the Cyclones to find the end zone.
Senior running back Nate Stephens broke free and sprinted 30 yards down the Cyclone sideline into pay dirt with 7:56 still remaining in the first period. Campbell’s kick made it 14-0 and the Cyclones were rolling.
On the ensuing possession, the Grizzlie offense had the ball for only three plays before punting away to the Cyclones who quickly went back to work.
Orton was on the receiving end once again this time from GIb Maupin for a 36-yard scoring strike to make it 21-0 on Campbell’s PAT.
The first quarter ended with a 21-0 score.
EHS picked right back up in the second quarter where they left off as sophomore receiver Jeriah Griffin was on the receiving end of a 35-yard touchdown toss from Maupin to make the score 28-0 on Campbell’s kick with 10:29 remaining in the first half.
The Grizzlies offense continued to struggle as the Cyclone defense was stopping everything the visitors from Grainger County were attempting.
Elizabethton continued to stack the scoreboard full of points as Mitchell took his reps under center and hooked up with Eli Blevins on a 23-yard strike to give the Cyclones a 35-0 advantage on Campbell’s kick with 6:19 left before the half.
The Cyclones tacked on one more score before the half as Stephens rolled into the end zone from six yards out to send the home team to the locker room with a 41-0 lead as the kick failed by Colin Nidiffer.
Coach Shawn Witten’s team tacked their final score of the night onto the scoreboard with 4:40 remaining in the third period when Maupin connected on his third scoring pass of the night on a 21-yard pass to Cam Baker.
With the student section boisterous behind him, Nidiffer’s PAT hit the top of the crossbar and bounced backward to give the game its final 47-0 score as the game was completed under a running clock.
The story of the game was the passing of both Mitchell and Maupin as Mitchell completed 6-of-6 passes for 121 yards and two touchdowns while Maupin was spot on as well completing 7-of-8 passes for 201 yards and three scores.
In a change of offensive philosophy, the Cyclones finished 13-of-14 passing for 322 yards and five touchdowns. The Cyclones also gained a total of 112 yards on the ground with nine carries to give them a total of 434 yards of offense for the night.
Orton led the receivers with four catches for 123 yards and two scores. Mitchell finished with two catches for 74 yards while Griffin hauled in four for 67 yards and a score. Baker had two catches for 35 yards and Blevins added one reception for 23 yards as both had a touchdown reception.
Stephens touched the ball only five times but had 100 yards of rushing to go along with his two scores.
The Grizzlies finished with a total of 158 yards as once again the Cyclone defense shined brightly. Andrew Blevins recorded two sacks in the contest while Wesley Shankles added one sack of the Grainger quarterback.
Elizabethton (1-3, 1-1) hits the road next week with a trip to the state’s #2 ranked Anderson Co. Mavericks with a kick-off slated at 7:30 p.m.