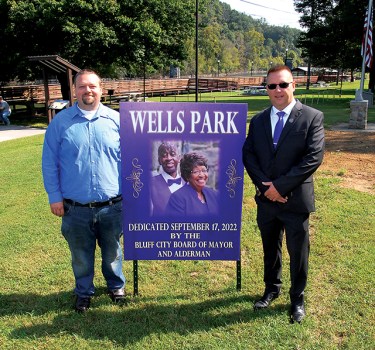 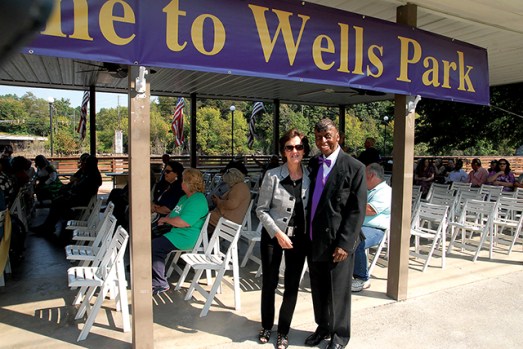 Star Photo/CY Peters Billy Wells took time to have his picture made with some of the attendees. 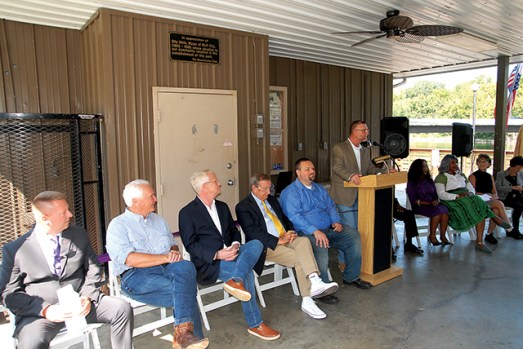 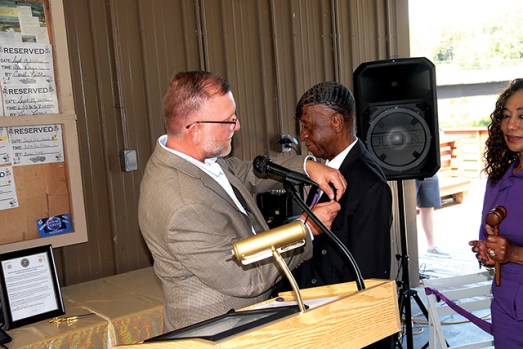 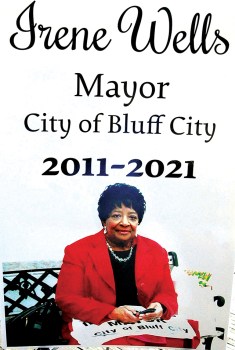 BY C.Y. Peters
Star Correspondent
A large crowd gathered on Saturday as it became a very historic day in Bluff City. Two former mayors, Billy and Irene Wells, now have a park honoring their name. Wells Park has a playground in the making, a plan of Irene’s before her passing. Billy was mayor from 1985 until 1991 where he improved many projects in Bluff City. He was the first black mayor in the state of Tennessee. Mayor Jeff Broyles was in charge of the ceremony. At the dedication Police Chief Greg Depew, Lt. Governor Ron Ramsey, Jon Lundberg, Tennessee State Senator and Sullivan County Mayor Richard Venable all spoke at the dedication with great praise for Irene and Billy. Also attending was State Representative Scotty Campbell.
Irene became mayor in 2011 after serving several years as alderman. She was active in the Sullivan County Democrats. She was a member of the State of Tennessee Board of Responsibility for the medical board, Sullivan County Jury Commission, United Way of Bristol, American Red Cross, Farm Services Board, Vice President of Bluff City United Fund, President of Ruritan of Bluff City, and President of the Sullivan County Democratic Women’s Club. She also represented Bluff City in the Sullivan County, Bluff City, and Kingsport Animal Board (Pet Works Regional Animal Service Member), Networks Sullivan County Partnership Executive Board Member, Sullivan County Family Justice Board, First Tennessee Human Resource Agency, Vice-Chair First Tennessee Development District Board Member, Johnson City Metropolitan Transportation Planning Executive Board Member, Northeast Tennessee Home Consortium Executive Board Member, and Bluff City Planning & Zoning Board Member.
Irene was the first black alderwoman and the first female mayor. She worked tirelessly for the community and the employees.
Her friend, Sherry Grubb, said Mayor Wells always had a smile on her face, and treated everyone with love and respect. “If you knew Irene Wells, you couldn’t help but be friends with her,” said Grubb. “She was a friend to the world. She gave herself 100 percent of the time.”
Irene Elizabeth Wells departed this life on December 14, 2021.