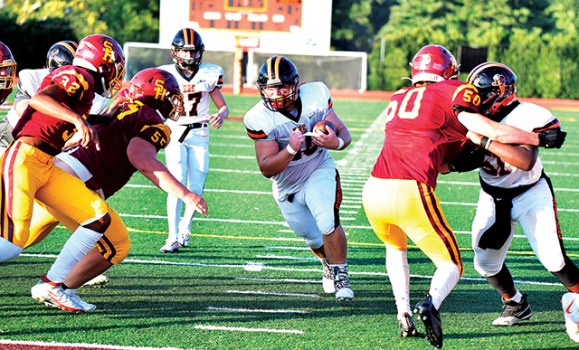 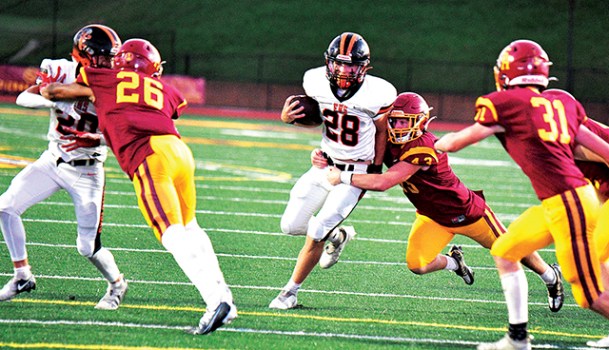 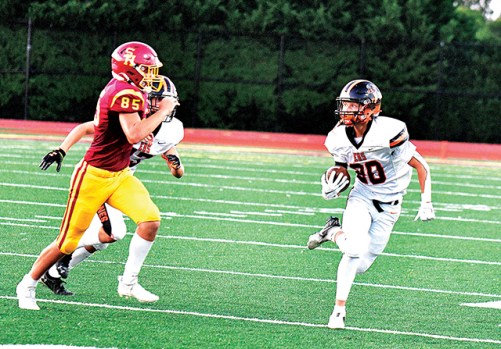 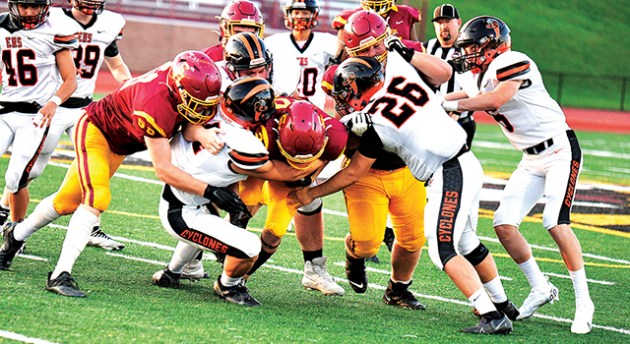 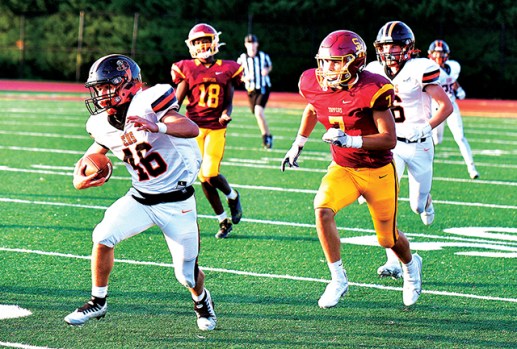 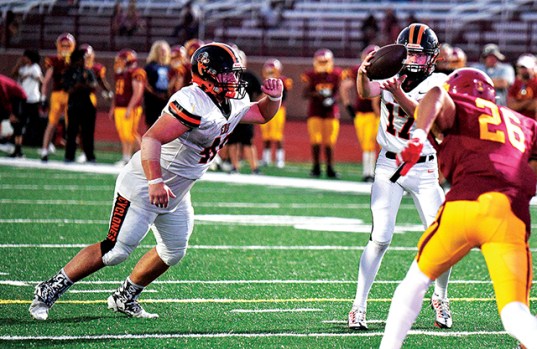 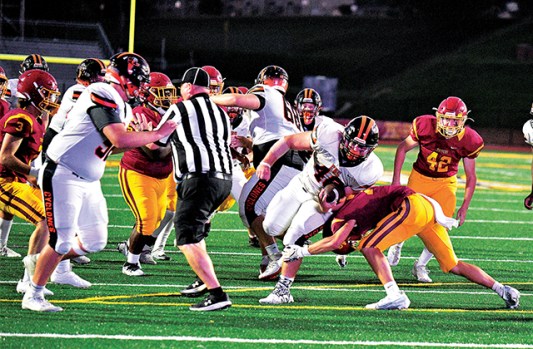 Star Photo/Ivan Sanders J Bird Wallin barrels through the line on his way to a 20-yard touchdown run - his second of the game.

STAR CORRESPONDENT
JOHNSON CITY – The Elizabethton JV Cyclones went on the road Monday seeking their second consecutive win after defeating Boone last week.
However, the Science Hill JV Hilltoppers weren’t as generous as the Cyclones found themselves on the wrong end of a 39-14 defeat as the Cyclones failed on at least three trips to the red zone to convert the opportunities into points.
Zane Huff got the ‘Toppers rolling in the first quarter when he crossed the goal line from one yard out. Palmer Kind booted the point-after attempt and Science Hill led 7-0 with 4:40 left on the clock.
The ‘Toppers added another score before the quarter ended when freshman quarterback Cole ReSue rambled 12 yards for the score. Kind’s PAT failed and the ‘Toppers led 13-0 at the end of the first quarter.
Elizabethton finally managed to get points on the board in the second quarter as Jaiden ‘J Bird’ Wallin bulled in from the one-yard line with 4:28 remaining before the half. Caleb Campbell booted the point-after and the Cyclones had shaved the lead to 13-7.
Coach Brian Jenkins team looked like they might take the lead just before the half driving toward the goal line before a Justin Whitehead pass was picked off to end the threat for Elizabethton.
The halftime score was 13-7 Science Hill.
Coming out of the break, the ‘Toppers wasted little time in adding to their scoring column as ReSue connected with Daniel Nerron on a 22-yard scoring toss to extend the lead to 20-7 after Easton Miller converted the PAT.
Science Hill tacked on another score in the third quarter as Huff added his second score of the contest from two yards out to push the lead to 26-7 as the point after attempt failed.
The Cyclones had the ball and were driving once again toward the goal line entering the fourth quarter. Once again it was the ‘Topper defense that ended the threat and turned a 100-yard pick six into more points as Rylan Jordan stepped in front of a Whitehead pass and took it the length of the field to push the advantage to 32-7 as once again the PAT failed.
Elizabethton added their final score as J Bird Wallin once again took care of business, this time from the 20-yard line. Campbell’s PAT sailed true through the uprights making it a 32-14 contest.
The ‘Toppers add one more score to make the final 39-14.
Elizabethton’s JV is scheduled to travel to Union, VA on Sept. 26 for a 6 p.m. kickoff.