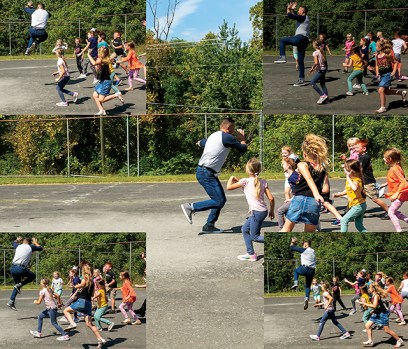 Star Photo/Larry N. Souders Valley Forge Elementary Principal Brandon Young sticks the landing after a full pirouette spin to the song “Let it Go” from Frozen. Young was helping his PreK- 2nd-grade students celebrate their school being recognized by the Tennessee Department of Education as a Reward School for the 2021-22 school year. This distinction places them in the top 5% of schools in the state for student growth in academic achievement. 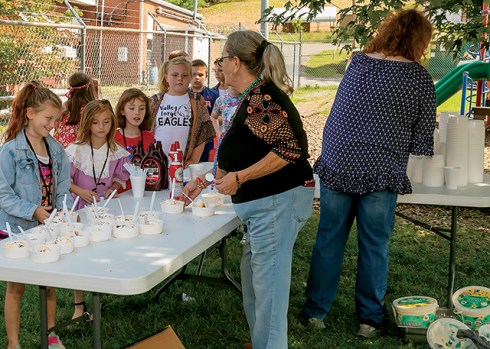 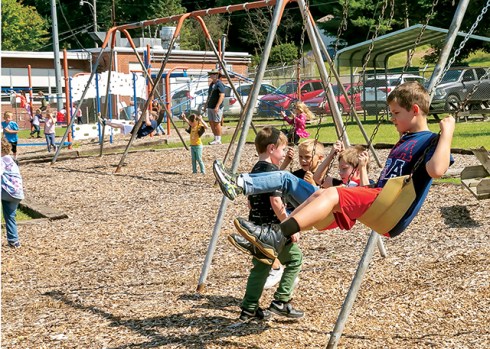 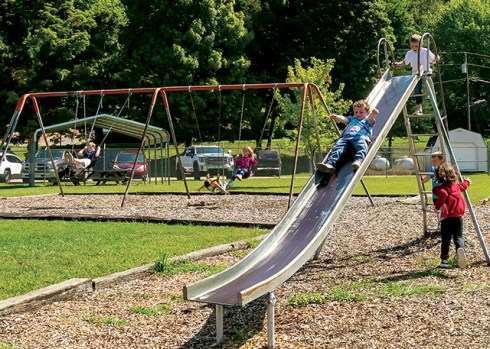 Star Photo/Larry N. Souders Not everybody wanted to dance so some students decided the swings and slides were way more fun. 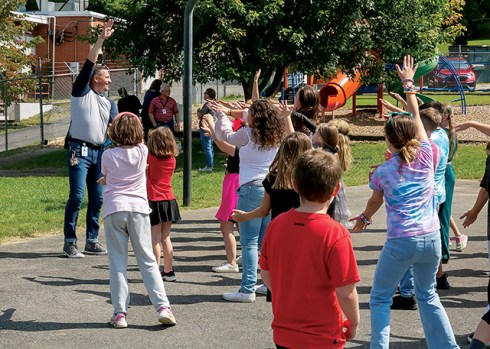 Star Photo/Larry N. Souders Principal Brandon Young (left) helps his 3rd-5th graders get their “Thriller” on, leading his students through the dance moves to one of Michael Jackson’s biggest hits of the '80s. 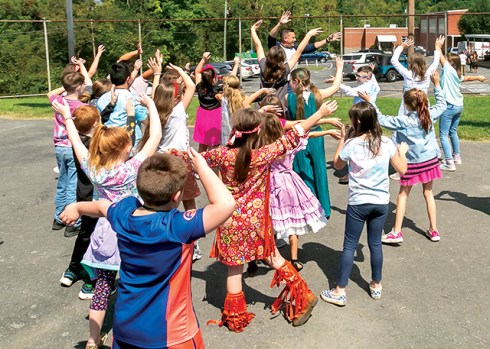 Star Photo/Larry N. Souders Principal Brandon Young (back, center) helps his 3rd-5th graders get their “Thriller” on, leading his students through the dance moves to one of Michael Jackson’s biggest hits of the '80s. 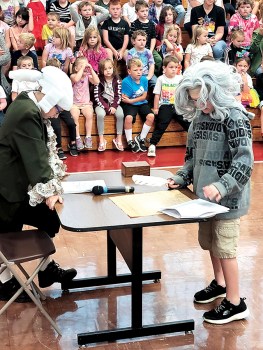 Photo Contributed Valley Forge School’s fifth-graders acted out a drama about the U.S. Constitution for K-second grade students in the morning, followed by the drama for grades third and fourth. 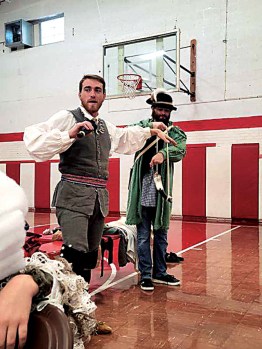 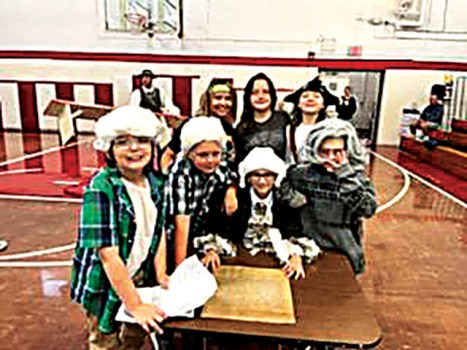 By Angela Cutrer
The Elizabethton Star
Valley Forge recently celebrated Constitution Day and its Level 5 Reward School status with a little drama and a lot of dancing.
The school’s fifth graders acted out a drama about the U.S. Constitution for K-second students in the morning, followed by the drama for grades third and fourth.
“It was a great day,” said Principal Brandon Young. “It was a wonderful day. For Constitution Day we had a gentleman from Sycamore Shoals State Historic Park arrive in full 1700s costume. He brought costumes so the children could dress in period clothing and they loved it.”
Later in the day on Monday, the school’s students celebrated their school’s Reward status with a “Soaring through the Decades” dance party, with ice cream sundaes provided by Harmony Free Will Baptist. Students and teachers dressed up in clothing from different decades, including the 1950s to now.
The Tennessee Department of Education ranks schools by levels. Level 5 Reward School status is the highest any Tennessee school can reach. Schools receiving this designation typically demonstrate high levels of performance or growth across all indicators, according to the TDE.
Across the state, 427 schools spanning 92 districts received designation as a Reward school, and 16 districts received designation as an Exemplary district.
Each year, schools are eligible for four types of designations based on their overall performance across indicators that are essential to student success, including how the school prepared students to be proficient (Achievement), accelerated student learning (Growth), encouraged students to attend school regularly (Chronically out of School), prepared students for postsecondary success (Graduation Rate and Ready Graduate), and supported English learners acquiring language skills.
Schools are recognized as a Reward school when they demonstrate high levels of performance or improvement in performance by meeting their annual measurable objectives across performance indicators and student groups, and the Reward school distinction places significant emphasis on improvement from the prior school year. From the 2020-21 TCAP administration, a significant number of schools saw improvement and increased participation in this year’s assessments to qualify for the distinction.
“To be a Rewards school, you have to be in the top 5 percent of schools in the state,” explained Young. “And we wanted to celebrate this achievement with the students. So, we’ve had a Constitution drama, a scavenger hunt and a dance where we all just had the best time. We are so lucky that we have such great teachers and supportive parents.”
On Oct. 3 at 6:30 p.m., teachers will be served a dinner by Valley Forge Free Will Baptist Church to celebrate the school’s Reward status, Young said.