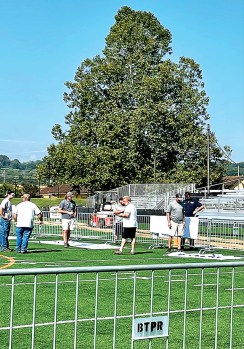 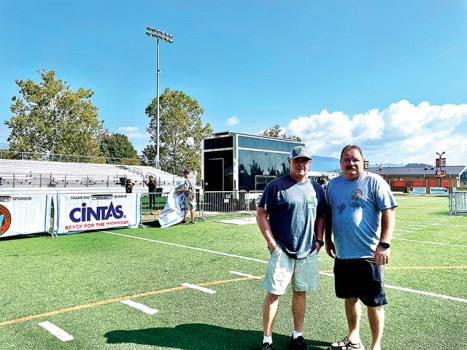 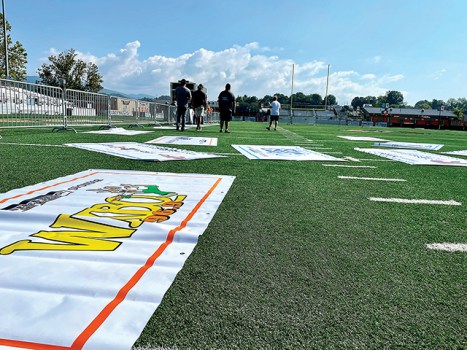 Photo By Lynn J. Richardson Lots of work happening as staff from the City of Elizabethton work together to prepare for Covered Bridge Days Kick Off Concerts Wednesday and Thursday, Sept. 21-22 at Citizens Bank Stadium at Elizabethton High School. 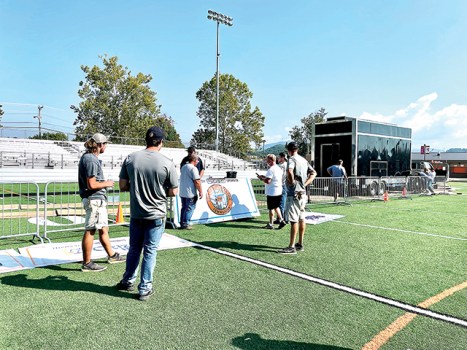 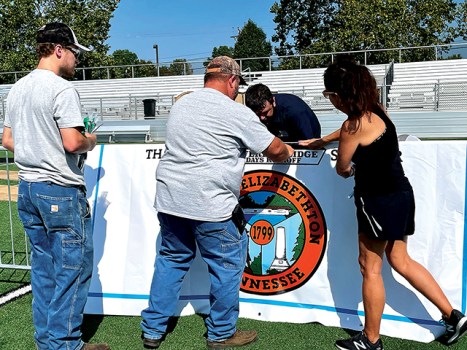 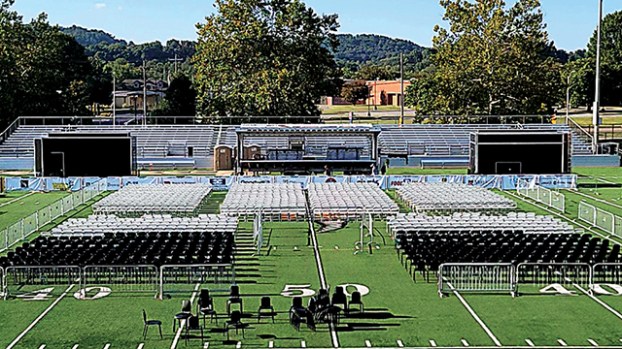 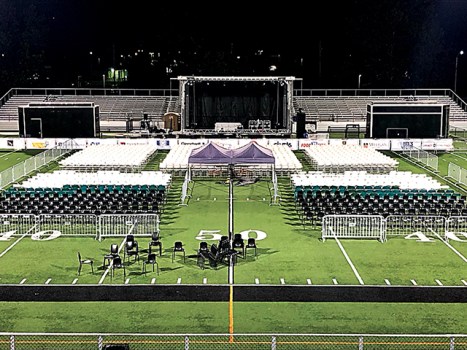 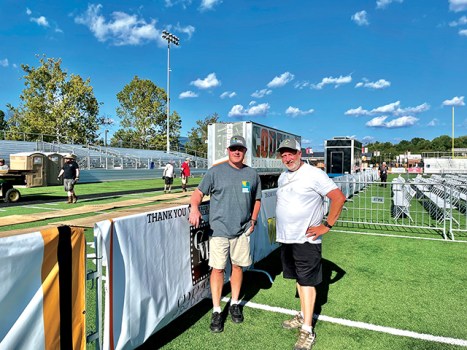 Buckle up, Covered Bridge Days fans. This one is going to be a doozy.
Elizabethton Parks and Recreation Director Mike Mains’ excitement is obvious as he talks about the festival that starts this week with two evening Kick-Off Concerts on Wednesday and Thursday and then fills the weekend with an extraordinary line-up of music, magic, food and craft vendors and fun.
“We are expecting record crowds,” Mains said. “We are getting tons of calls, calls coming in from outside the area as well as from local people. We have everything in place and all details finalized. We’re ready to go! And to top it off, the weather is supposed to be absolutely beautiful.”
He credits “all the wonderful people who have worked on the event” — the Parks and Rec team, various city departments and other individuals who have contributed their time and energy.
“We also can’t thank WJHL, WBEJ, WCQR, the Elizabethton Star and all the local media enough for their support,” he added. “That constant talk in the media has made a huge difference. I don’t think we could have done anything more than we have to spread the word about this.”
Elizabethton will come alive with music beginning Wednesday night and continuing on Thursday with the first ever Covered Bridge Days Kick-Off Concerts featuring contemporary Christian singers Crowder with special guest, Big Daddy Weave, on Wednesday; and country stars Kip Moore and Dylan Scott on Thursday. Both concerts will be held at Citizens Bank Stadium at Elizabethton High School beginning at 7:30 p.m.
Greg Workman, Director of Purchasing for the City of Elizabethton, is spearheading the two kick-off concerts, tapping into his previous work with Axis Security, an agency that provides security to some of the largest entertainment venues in the southeast. That experience helped him find the entertainers for the two concerts.
“We’ve never brought this type of entertainment to our city,” Workman said. “Our city manager, Daniel Estes, said ‘Covered Bridge Days have always been wonderful, but what can we do to step it up a notch? We got busy, found entertainers and our entire city council gave us the green light. Then we worked with Elizabethton City Schools to bring these concerts to Citizens Bank Stadium. And here we are.’”
Workman is expecting about 4,500 concert goers for Wednesday night’s concert, with numbers for Thursday still to be determined. Standard festival security rules will be followed with a clear bag policy at the event and no outside chairs, large purses, coolers, outside food or drinks, or umbrellas will be allowed in the stadium.
Free shuttle service will be provided by Raceway Ministries to Citizens Bank Stadium from the Ingles parking lot and along the Tweetsie Trail for the Wednesday and Thursday night concerts.
Workman said tickets are still available but are going fast. They are available at the City of Elizabethton Covered Bridge Kick-Off page on Facebook, Instagram, and on ETix.com – https://www.etix.com/ticket/v/24749/elizabethton-high-school-citizens-bank-stadium. He warned tickets may be available on other sites but at an inflated cost.
The stellar line-up of entertainment will continue into the Covered Bridge Days Festival, Friday through Sunday, beginning each day at 11 a.m. The event will feature a variety of live entertainment including three free evening concerts, arts and crafts vendors, a foam party, magic shows, a butterfly exhibit, inflatables and games at a Kids Island, a Youth Business Fair and a Third Block block party. There will be many free activities for children.
“School is out, so this gives us an opportunity to serve even more families with Kids’ Island activities, mascot appearances, and inflatables,” Mains said. “We will have exceptional entertainment, we already have tripled the number of arts and crafts vendors from last year, doubled the food trucks, and added new characters to entertain the children.”
Mains is expecting large crowds for all Covered Bridge Days evening concerts and suggests bringing folding chairs, as there will be limited bleacher seating available.
The Grascals are set to perform on Friday evening at 8 p.m. The internationally acclaimed bluegrass group has earned three Grammy nominations and two Entertainer of the Year awards from the International Bluegrass Music Association.
On Saturday evening, September 24, Ricky Skaggs and Kentucky Thunder will take the stage at 8 p.m.  A 15-time Grammy Award winner, Skaggs has won eight Country Music Association awards including the coveted “Entertainer of the Year” award and has been honored by induction into six different Hall of Fames.
A spectacular fireworks show, sponsored by Carter County Bank, will begin immediately following Skaggs’ performance.
The festival will conclude on Sunday with a 4:30 p.m. performance by multi-Dove award winning and multi-Grammy nominated bluegrass Southern gospel music group, The Isaacs, consisting of Sonya Isaacs Yeary, Lily Isaacs, Becky Isaacs Bowman and Ben Isaacs. On August 10, 2021, they were invited to become members of the Grand Ole Opry. One Church Worship will open for the Isaacs at 2:30 p.m.
For a complete festival schedule, visit coveredbridgedays.org.