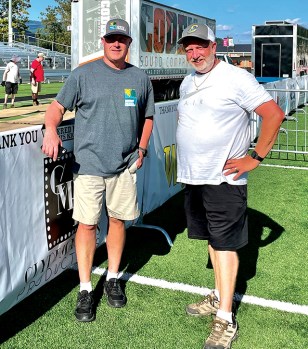 Covered Bridge Days appeared to be off to a great start Wednesday and Thursday night, with the first-ever Covered Bridge Days Kick-Off Concerts featuring contemporary Christian artists Crowder and Big Daddy Weave on Wednesday, followed by country music artists Dylan Scott and Kip Moore on Thursday.
More than 3,500 music lovers filled seats at Citizens Bank Stadium at Elizabethton High School
to hear the two award-winning contemporary Christian artists. At press time, no attendance count was available for Thursday night’s event.
“I think the Kick-Off Concert events went great,” said Mike Mains, Elizabethton Parks and Recreation Director and organizer for Covered Bridge Days. “The performances they put on were incredible. Everyone seemed to have a good time and so far, we’ve heard nothing but great things from the community.”
Mains applauded the work done by Greg Workman, Elizabethton Purchasing Director, and organizer for the two Kick-Off Concerts.
“I think it went very well,” Workman said. “There was a great crowd with lots of energy and the bands were terrific.”
For Mains, one of the major storylines concerning the concerts and the festival, is what he calls “incredible teamwork.”
“Just about every single city department is involved this year,” he said. “Almost everyone who works for the City of Elizabethton, whether they volunteered, worked the gates, helped with set-up, just whatever, we all came together this year. Our city council has fully supported us, allowing us to do things like this.”
Workman echoed Mains, adding “Every department played a key role in making these two kick-off events take place. From load in on Tuesday to load out on Friday, approximately 60 Elizabethton City staff and 20 Elizabethton City School system employees were involved.”
He also added a personal note concerning one of the fans who attended the Crowder/Big Daddy Weave concert.
“I personally was forwarded an Instagram message from someone that was going through some tough times and really struggling with life at the moment,” Workman said. “They randomly won free tickets to the concert. She said she felt every emotion possible and finally found peace. That makes putting on these concerts worth the time and effort.”
With the kick-off events in the rear view, Mains says his Parks and Rec team will now turn their attention to the Covered Bridge Days festival itself.
He specifically mentioned Garrett Johnson, Maintenance Supervisor for Elizabethton Parks and Rec. “His guys are all over the place,” he said. “They are going from setting up the concerts to now getting hay bales to decorate for the Covered Bridge Days festival itself. The teamwork will carry over into the weekend.”
Festival events began with a two-day pickleball tournament with 60 participants, a culmination of the Parks and Rec’s popular pickleball leagues.
There will be a full schedule of activities, arts and crafts, food, ongoing entertainment and fun throughout the weekend, with evening entertainment featuring the Grascals on Friday, Ricky Skaggs and Kentucky Thunder on Saturday night followed by a spectacular fireworks display. Sunday afternoon will feature the Isaacs.
And then it will be all over for another year.
“When all is said and done, we will debrief and see how we can improve and make it even better next year,” Workman said.
“We will be working to improve the experience and make this event something people really look forward to,” Mains added. “I can’t wait till next year!”