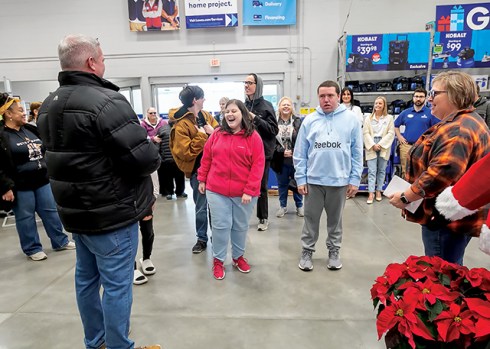 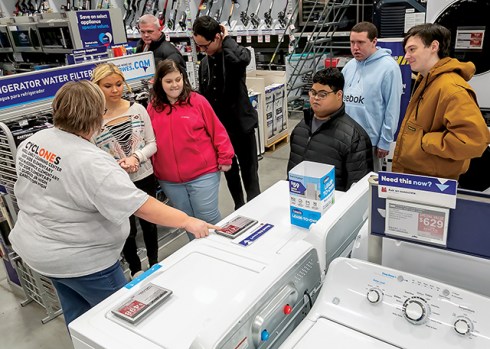 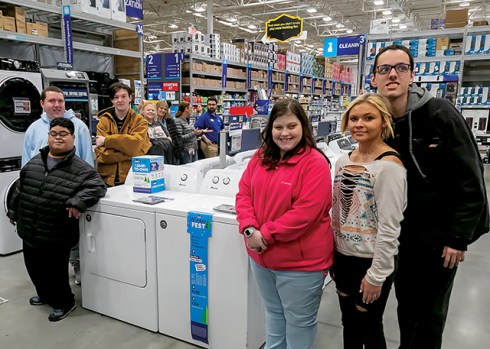 Star Photo/Larry N. Souders After making their selection for the classroom's new washer-dryer combo, the SPED class poses by their choice. Class members are starting with Jet in the gold coat (counter-clockwise), Austin, Jordan, Leighanna, Allison and Zach. 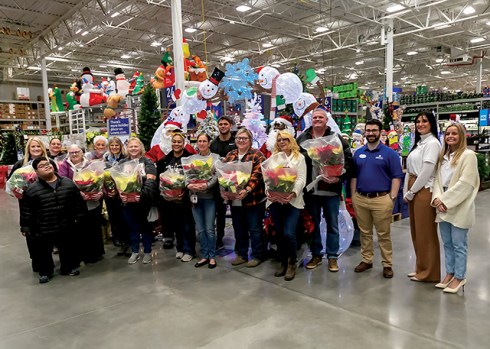 Star Photo/Larry N. Souders After making their purchase on their shopping field trip, the group was given one last surprise. Lowe’s handed each member of the class, and members of the Chamber of Commerce, Northeast Community Credit Union, and Community First Bank a poinsettia and the class was also given a Christmas tree for their classroom. Pictured in no particular order are Joy McCray and Luke Freeman from the Chamber of Commerce, Andrea Lewis from Northeast Community Credit Union, Jacob Bellia, Katie Townsend and Brittany Tanner from Community First Bank, and the students and teachers of the SPED class from Elizabethton High School. 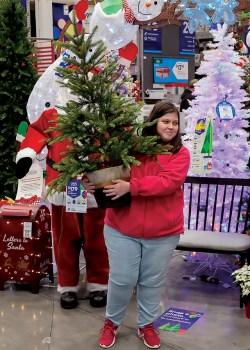 Star Photo/Larry N. Souders SPED class member Leighanna was selected to carry the Christmas tree out after it was presented to her class by Lowe’s store manager Shane Case.

By Larry N. Souders
Star Correspondent
Santa’s helpers come in all shapes and sizes, and the students in the Special Education class at Elizabethton High School got to meet some of those helpers recently.
Amy James, one of the Special Education teachers at Elizabethton High School, said community supporters came into their classroom about a month ago and she made a presentation in which she expressed a concern about one of the appliances in their classroom that was in disrepair.
The classroom includes a washer and dryer to address any cleaning that might be needed during the day, and they both were “pretty noisy.” James said the visitors “came together and made donations to replace the appliance, a dryer, that was not working properly.”
Those supporters included members of the Elizabethton Chamber of Commerce, Northeast Community Credit Union, and Community First Bank.
Community First Bank’s Jacob Bellia, the Commercial Relationship Manager, said he heard about the need at a Chamber meeting and that Community First wanted to get involved with this project to start giving back to the community by making a $250 donation to this project.
After commitments from the community, James organized a field trip to Lowe’s for the class. This would be an opportunity for several life lessons to be shared with the class and help them learn how to balance a need with the budget to fulfill that need.
On Friday morning, the class members loaded onto their bus and headed to the Lowe’s just across the highway from the school. Upon arriving to the store they were greeted by manager Shane Case and several other associates from the store. He told them he was very happy to see them and was looking forward to helping the class make a wise decision on their needs.
A small lesson in comparative shopping was given by James, who briefly explained how it’s better to buy matching pairs and talked about the features of the different sets. Once the class settled on the set they wanted to purchase, everyone headed back to the front of the store.
Lowe’s committed to helping with the purchase by setting up free delivery and setting up the washer-dryer combo once it was in the classroom.
Case then put on his “Santa hat” and gave the class a Christmas tree and a staff member handed poinsettias to each of the teachers and to the members of each organization that participated in the day’s event.