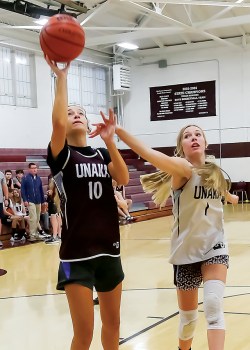 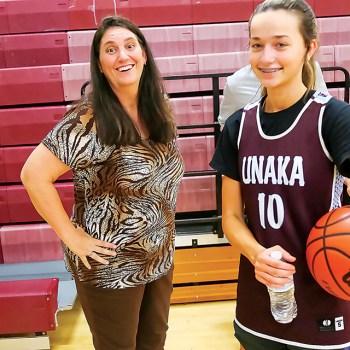 Star Photo/Larry N. Souders Lyndie Ramsey recently dethroned all-time scoring leader Angela Peters (left), who wore the number 22 during her career at Unaka. The record of 2,154 points stood from 1988 until this past Thursday evening when Lyndie Ramsey eclipsed the mark against the Lady Black Knights of Chuckey Doak. They share a laugh after being introduced by Ranger Athletic Director Wes Wright Wednesday afternoon. 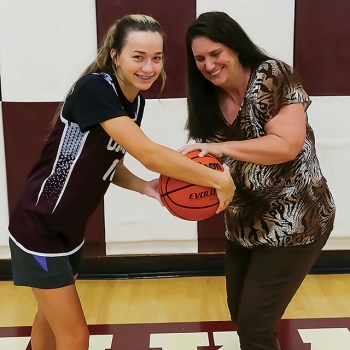 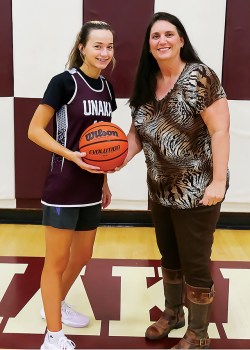 Star Photo/Larry N. Souders The torch, well actually the ball, has been passed from one generation to the next as recently dethroned all-time scoring leader Angela Peters (right) passes the ball to Lyndie Ramsey (left), who eclipsed the mark against the Lady Black Knights of Chuckey Doak.

STAR CORRESPONDENT
Since 1988 the Unaka Lady Rangers scoring record has been held by Angie Peters, but Lyndie Ramsey has overcome Peters’ mark of 2,154 points and is now the new scoring leader for the Lady Rangers program.
“I am so proud of her,” Peters said. “It has been a long time, but I am glad to have someone like Lyndie top it. I knew it would happen someday and I am glad it is her.”
Peters played under coach Ronnie Hicks and had a high game of 51 against Johnson County in her senior season. Ramsey set the record on December 2 against Chuckey-Doak and has more than half the season to add to her record-setting total.
“I come from a family in which I’m the only girl,” Ramsey said. “And we are all very competitive athletically. My brothers always played hard against me and didn’t give me anything. I had to work for everything. That’s always the approach that I have taken my whole life.”
Beginning in youth clubs,  Ramsey honed her skills through the years to a level to where she finished second in the Miss Basketball awards in 2021 as a junior. Ramsey is currently playing while staving off an – as yet – undiagnosed illness that has caused her to lose weight and have fatigue.
“I get tired easily and I have to drink lots of water and fluids,” Ramsey said. “But, I have a strong desire to keep playing and I will. My competitiveness is strong and I won’t let this keep me down. I really want to put this record out of reach and if someone beats it, they will have had to play hard and consistent basketball for four years. They have to earn it like I did.”
The Lady Rangers are struggling this season with a 1-6 record overall this season but Ramsey sees her role as a floor general as well as scoring leader saying, “We have struggled so far, but we are playing hard. We have handicaps but that just means we have to play harder and smarter to make up for what we lack. Mostly we have to play physical.”
As far as her future, Ramsey hopes to play basketball at the next level while earning a degree as a speech therapist or an occupational therapist.
“I have had a couple of offers,” Ramsey said. “But I don’t want to rush into a decision. The school I go to has to have the courses and curriculum that I want. But I do really want to play after leaving here. Basketball has been a big part of my life and I have worked hard since I was young and I even played on boys teams in youth clubs. I have played on travel ball teams that have played all over the country and I loved it.”
Unaka will play next at Happy Valley on Monday. 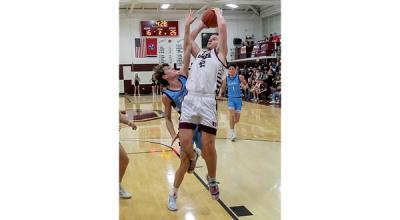