‘God can use a crooked stick’: A life of surrender 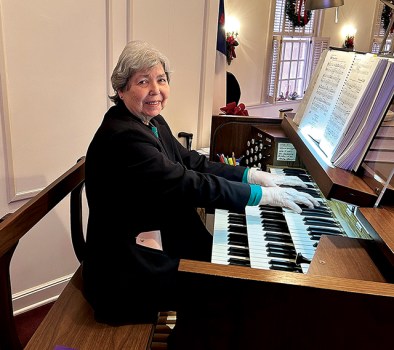 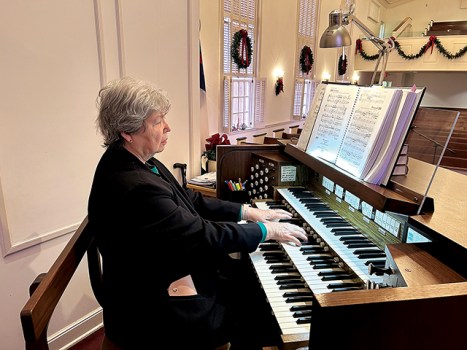 Star Photo/Ron Marvel Willette Ericson plays a postlude piece as the congregation files out at Westminster Presbyterian in Johnson City.

By Ron Marvel
Star Correspondent
On Christmas morning this year when most families are gathering around their trees or getting ready to go to morning worship, Willette Ericson will be doing what she has been doing for the majority of the last 70 years, sitting down next to the piano or organ preparing for worship.
This Christmas Sunday will be the last time she will play the piano or organ in an official capacity.
She plays beautifully, but arthritis in her hands and feet has forced this decision. “My hands, my feet and my legs have become a detriment to my playing,” she said.
From playing the piano and organ during church services to serving on the mission field, to helping high school kids in the classroom for nearly 30 years, Ericson’s motivation for doing has been conducted with the sole purpose of glorifying God.
“It is just not playing the notes. It is a part of me that says ‘I am doing this for you Lord’ …it is a privilege,” she said. “For several years I was strictly a volunteer. I didn’t want pay for that; I wanted to do it simply as a service for God.”
When Willette was a pre-teen in Toccoa, Ga., her friend Judy started playing piano and Willette was hooked. She so admired the music she heard she asked her friend to help her learn. That path took her to Moody Bible Institute where she enrolled as a church music major, using her musical gifts and her desire to serve God towards full-time ministry. Her plans were to go to serve at a Christian radio station in Quito, Ecuador, but God had other plans, bringing a mechanic/pilot by the name of Keith Ericson into her life. Married now for nearly 62 years, the two newlyweds would serve from 1963-1966 on the mission field in Liberia, West Africa. “Serving the Lord doesn’t mean that the way you start off means that’s the way you will end up,” she said.
This redirecting also brought her to Carter County in 1969, as Keith would serve as an instructor at MBI in Elizabethton. Along the way, she taught students; shared her love of music; completed a second degree in Elementary Education; and earned a Masters of Arts in British Literature from ETSU. In addition, the couple was blessed with two children — Steven and Pamela — who attended school at Unaka.
For the past 70 years, Willette has been playing piano and organ, the last 27 at Westminster Presbyterian in Johnson City. Willette’s desire to be used by God and bring Him glory has been her stirring force.
“My mother told me God can use even a crooked stick, if he owns the stick,” she shared.
Her desire to bring God glory and encourage others along the way would guide her as she would serve in various roles in the Carter County School System. From English teacher at Happy Valley and Unaka, to spending a period of time as Assistant Principal at Happy Valley, Willette’s final years were used helping students in credit recovery at Cloudland her desire has been steadfast. “When we seek out God in our decisions he won’t let us down, you can simply see his leading in the way things work out,” she said.
Proverbs 3:5-6 has been her life verse: “Trust God in all of your ways and lean not onto your understanding.”
She also said scripture teaches that God has a season for all things. That is why she is at peace with her decision to step down on Christmas Day. “This is a time the Lord has showed me it is time to quit,” she said.
In reflecting on her many years of service, she offered advice for those who desire to follow God in service. “A young person has to be committed to the Lord, that commitment is sterling!”
She went on to say “it also means they are willing to go wherever God leads you. It is not an easy thing, but God will place desires in our heart, there will be a peace about what you are doing. God is not a God of confusion.”
It has been said that a life of seeking out God and helping others will bring blessings with it. Willette agreed. “Knowing that God is your Father is a blessing unto itself. He has always supplied our needs. He is always there. I might not always see Him, but He’s always there.”
When Willette Ericson shares her story, there is no sense of sadness or regret. She said she will miss playing, the challenges of preparation and the relationships with individuals like long-time friend and Westminster Presbyterian Choir Director David Hale. But a sense of joy comforts her because she had these experiences and used her gifts for God.
Christmas Day will come and go for Willette, but her example of service and surrender will continue to provide a measuring stick for others for years to come.
Note: There will be a reception for Willette Ericson at Westminster Presbyterian in Johnson City on December 18, 2022, in between the two services. If you would like more information or would like to send a note of encouragement you may contact Westminster Presbyterian at (423) 283-4643, 2343 Knob Creek Road, Johnson City, TN 37604.