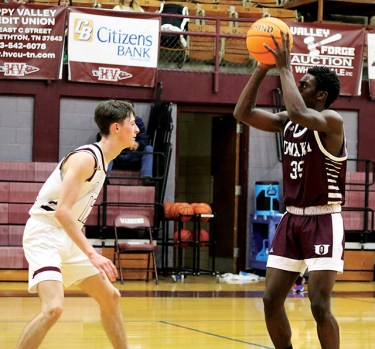 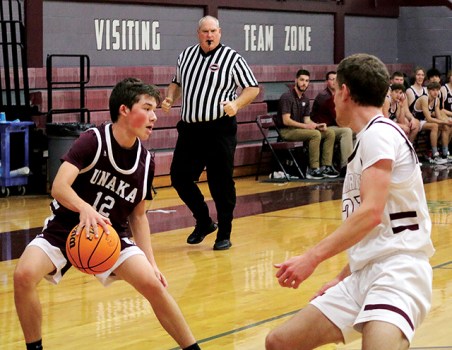 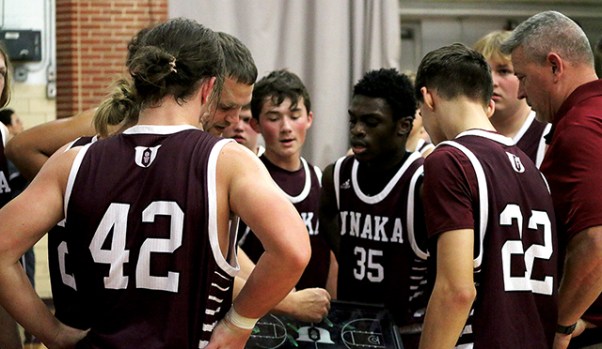 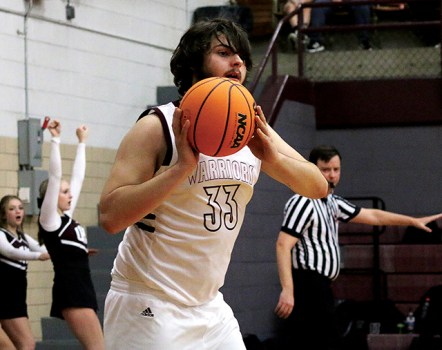 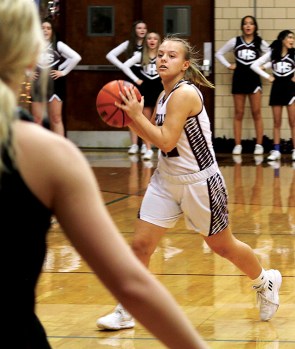 Star Photo/Ron Marvel Happy Valley Guard Cayden Anderson picks the ball us off the dribble as she works up-court. 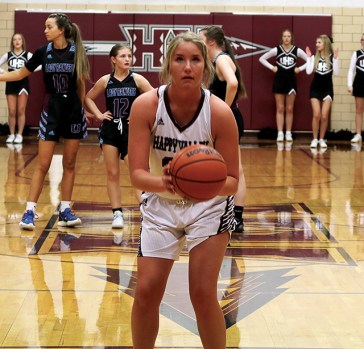 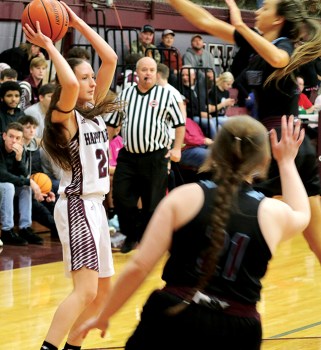 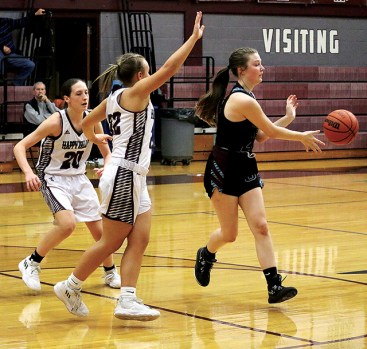 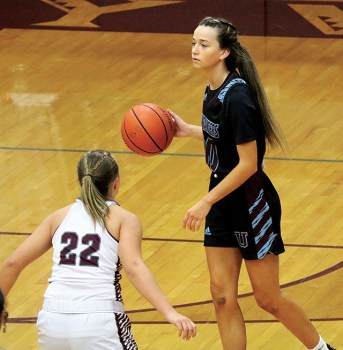 By Ron Marvel
Star Correspondent
Happy Valley would host cross-town rival Unaka in front of a raucous crowd at Bayless Gymnasium Monday night. Both teams are trying to build momentum before the Christmas break in a cross-county rivalry game.
Boys- Unaka 69 Happy Valley 43
A stingy disciplined defense would keep Happy Valley off-balance through the game as Happy Valley would struggle shooting. Unaka would jump out to an early 12-2 lead sparked by five points in the first few minutes by Landon Ramsey. James Murray would hit a three-pointer to close to within five, but Happy Valley would respond with a  7-0 run of their to close the first quarter out. Colby Chausse would do his best to keep the Warriors in the second period scoring 11 points in the quarter, but a three-pointer by Mason Wilson and offensive rebound and put-back would stretch the lead to 16 before the half.
Unaka’s defensive speed and discipline were on display in the second half as the Rangers kept good spacing and the inside presence of Marcus Shomaker to clog the lane for the Warriors. Joe-z Blamo started working the inside, drawing fouls and knocking down his free throws to extend the Ranger lead to 24 at 4:13 of the third. Colby Chausse continued to knock down shots for the Warriors and James Murray would hit a three-pointer in the final period to cut the lead under 20, but it was as close as the home team would get. Landon Ramsey would finish with 23 to lead all scorers and Joe-z Blamo would get 15 going seven of eight from the free-throw line. Marcus Shomaker would score 14 and do a lot of the dirty work inside for the Rangers, grabbing 13 rebounds; Johnny Douglas coming off the bench, would provide good effort defensively in helping shut-down Dakota Grindstaff. Coach Dugger would share his thoughts after the game “good effort, we are getting better; we wanted Dakota out of the game to force them to go somewhere else.” On Shomakers efforts, Coach Dugger added, “Marcus is putting in the work and is showing he will do what we need to do to win and become another person we can count on offensively.“
Girls Unaka 47 Happy Valley 40
Lyndie Ramsey would serve as a wrecking ball to Happy Valley’s second-half attempts to rally. Working her way along the perimeter and quickly firing up three-pointers, hitting six on the night, to keep the home team Warriors at arm’s length. The first half was a see-saw contest that saw several lead changes. Two offensive rebounds and putbacks by Kadie Bailey would give the Warriors an early lead. Ramsey would go from perimeter to post on a steal to tie things back up at 18 at 5:14 in the second period. Cayden Anderson would hit her second three-pointer of the period to give her team the lead back at 21-20; Happy Valley would look to extend the lead but, as the case would be all night, would struggle from the free-throw line. Ramsey would hit a floater to end the half giving the Rangers 25-22 lead heading into the locker room.
The second half would see Lyndie Ramsey pick up where she left off, hitting another three-pointer. Marcida Moore would steal a pass along the sideline and race for a layup to cut the seven-point Ranger lead to five. The Warriors would look to cut the lead to two, but an offensive charge would end the third period. Ramsey would once again work herself open to hit another three-pointer to send the Rangers to an 11-point lead. Kadie Bailey would cut into the Ranger lead with a scooping layup at the 4:13 mark but Unaka would play keep away and drain the last 4 minutes as the team would exchange free throws to produce the final score. Ramsey would score 33 points in the win and Kadie Bailey would get 17 and Cayden Anderson would chip in 11 in the Warriors loss. Coach Kenneth Chambers would share his thoughts after his team’s road win, “we played together as a team; we have been working on our perimeter game because we know everyone is going to dog Lyndie; with our size, we are going to have to build a perimeter game.”
JV Boys – Unaka 64 Happy Valley 60
In what was the most entertaining game of the night, the Rangers JV squad was able to hold off the Warriors in the final seconds to get a hard-fought win. Jackson Deyton would score 23 on the night in the win, while Ryan Crabtree would add in 17, hitting three three-pointers, Donovan Maxwell would lead the Warriors with 18 and Ron Parker would score 17 in the back-and-forth contest.