Milligan and Montreat Split a pair before Christmas break 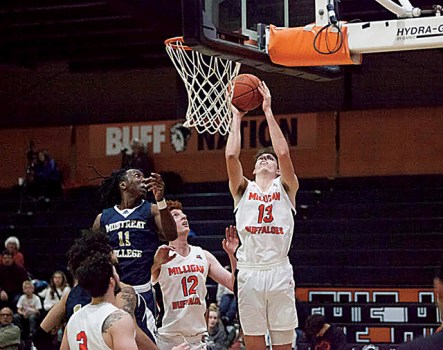 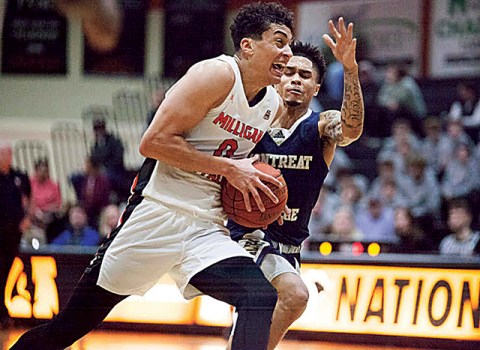 Contributed Photo/Mike Hynes Sami Sanad muscles through for the layup. 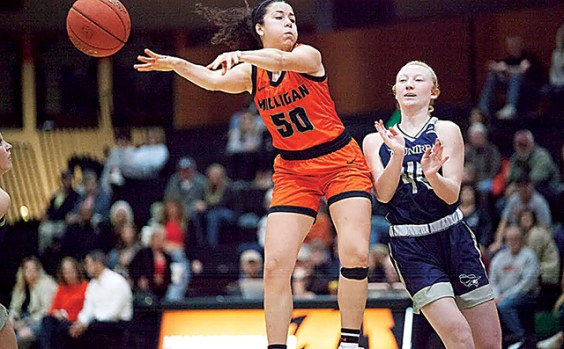 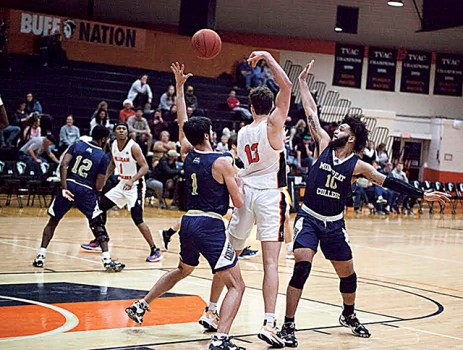 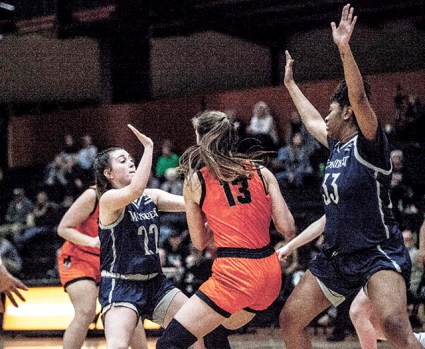 By Ron Marvel
Star Correspondent
Milligan played host to Montreat College Tuesday night as both programs look to go on Christmas break with momentum. Steve Lacy fieldhouse served as the setting as both the Men’s and Women’s programs played back-to-back contests for early seeding in the Appalachian Athletic Conference.   The two teams would split the games in two highly competitive games.
Womens- Milligan University 63 Montreat College 48
The Lady Buffs would create some space in the final quarter outscoring the Lady Cavs 18-10 in the final period. Kayla Romnes would get the Lady Buffs started with a five-foot runner in the paint. Kristy Galea and Semaj Clark would then hit a pair of long distant three-pointers to post the Lady Buffs to an early 12-3 lead before the lady Cavs would go on a 4-0 run. Kaylee Hendrickson would answer with a three-pointer of her own to send Milligan to a 14-9 edge. Montreat would keep the game close off a lay-up from  Makayla Thompson to end the first period with the Buffs up 18-14. Lauren Longmire would put in quality minutes for the Buffs in the second period with a couple steals and several rebounds while knocking down a couple jumpers to put the Buffs up 22-17. Cloudland’s own Stacia Wilson would push the lead to ten off an assist from Kenzie Campbell. Cavs Daisy Rice would hit a three-pointer in the final minutes of the second half to set the score at 29-24 advantage Lady Buffs.
Montreat came out of the locker room on fire scoring six in a row to take their first lead at 30-29 before the Lady Buffs would go on a 10-0 run of their own, sparked by a Aida Munoz three-pointer. This would be a lead the Lady Buffs would not relinquish as the Lady Cavs would cut the lead to eight late in the third period but that was as close as they could get. Kayla Romines would lead the Buffs with 16 in the win, while Semaj Clark would come off the bench to score ten. Cloudland’s Stacia Wilson would pull down 11 rebounds in the win. Makayla Thompson would score 12 in the loss for Montreat.
Mens- Montreat College 78 Milligan University 75
In a contest that would go down to the final buzzer, Montreat would pull out the win as Milligans Dylan Bartley’s game-tying three-pointer would clank off the front of the rim. Montreat would lead by as many as 12-points in the first period before the Buffs would go on a 15-0 lead sparked by Buffs Sami Sanad’s thunderous dunk and a couple free throws by Levontae Knox to give the Buffs a three-point lead at 26-23. The Buffs could not build on the lead as the Montreat would hit a three-pointer to retake the lead. Milligan’s Eli Walls snatched a steal on the baseline and raced through the paint to help Milligan retake the lead at 40-34 going into the half.
Milligan would hold the lead for a little more than 10 minutes of the final half before Montreat’s Micheal Erbeck’s layup would give the Cavs a two-point lead. Matthew Roberts banged home a three-pointer to knot the game up at 59-59.  The Cavs hit a 14-foot jump shot to send Montreat out to a six-point lead with 5:31 left, Dylan Carson would cut the lead to one off a Carson Flynn reverse layup. In the final minutes Cavs Jamiel Wright would hit a big three-pointer to push the Cavs lead back to 76-71. With just ten seconds left Buffs Sami Sanad would cut the lead to one off a layup as Milligan tried to foul, but Rivera Gabriel would be left open under the rim for a layup to give the game its final score off 78-75.
Buffs Dylan Bartley would lead his team with 16 while Sam Gold would chip in 15, Levontae Know would score 12 and add seven assists. Milligan would outshoot and out rebound Montreat 48-31 but 22 turnovers on the evening would turn out to be their downfall.