Could there be a white Christmas? Elizabethton street department says bring on the snow 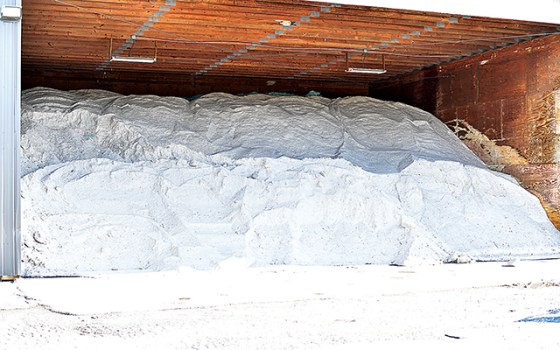 Contributed Photo/Ivan Sanders The City of Elizabethton currently has 1,100 tons of salt on hand for snow events. 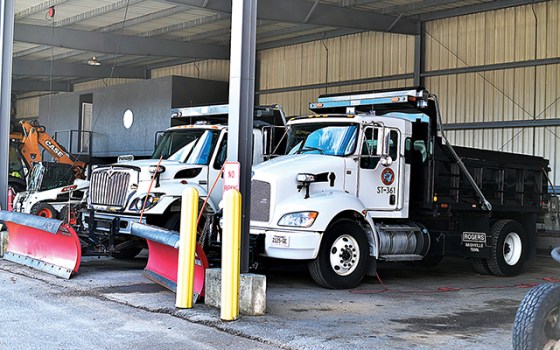 Contributed Photo/Ivan Sanders Trucks are maintained daily by Elizabethton Street Department employees so they will be ready to roll when the snow starts to fly.

Contributed by City of Elizabethton Public Relations
As local meteorologists began talking recently of how the Tri-Cities area could potentially have a white Christmas this year as a strong cold front begins to make its way toward the area, many residents are already getting a case of singing the popular holiday song “Let it Snow.”
And while a white Christmas enhances the holiday, there are others who have already made plans on how working to ensure that motorists who will be taking to the roads to go to their family gatherings can arrive safely should the weather event happen.
The City of Elizabethton street department has been on weather standby since November and is ready to mobilize should they receive the call requesting their presences.
“Starting in November, we put people on call,” said Elizabethton Street and Sanitization manager Danny Hilbert. “We have 14 people in the department on standby for snow. We normally ride double. I don’t put them out alone in a truck because if they get out there and have a problem somewhere, an accident or something, I want to have somebody with them. We don’t always get to do that because our staffing level right now is not where it needs to be yet. But most of the time we ride double.”
Depending on the severity of the snowfall, Hilbert will also come in and work along side his department’s employees. He explained the process for getting the street department involved should snow fall.
“If a supervisor calls me and says he got called in for snow — how that happens is we have someone on call and we rotate that just like any other department does,” said Hilbert. “And if the police department calls, the answering service calls who is on call and tells them. The police department calls the Com Center and they contact the answering service telling them the city streets are getting slick — can you have someone come in.”
From that point, it becomes a matter of accessing what is going on with the streets and bridges in Elizabethton before the next step is taken.
“The on-call person comes in first and assesses the situation and if he deems the situation necessary, he calls the supervisor and he then comes out to look things over and see how many people is needed to have for that particular snow event,” Hilbert said. “We keep an eye on the radar to see if it’s going to continue. We look at the radar days ahead. If it’s going to be a pretty big snow event, Supervisor Jeff Marlowe will determine how many he needs of the 14. If he gets here and sees that the streets are getting pretty slick, but not a hazard at that time, he will just call enough in to handle the situation.”
The manager added that the bridges are what are the most troublesome as snow will begin laying on the bridge before it even begins to lay anywhere else. Typically, the team won’t begin attacking the snow until they see it starting to lay on the ground.
Once the team is assembled, each driver knows the drill from that point.
“Every one of our drivers are assigned to a truck and it is that person’s truck for a whole snow season,” Hilbert said. “It is his responsibility to make sure that the truck is ready to go. They check them and drive them during the week. If they find anything wrong with it, they turn it into the garage and get it taken care of.
“It never fails that one of the guys will get into their truck and it’s the nature of the beast that rust and what have you, the salt just eats things. It destroys stuff. That driver will get out on his route and it isn’t no time until he is back in here because the salt spinner has stopped working and the auger will stop, or a light goes out.”
Each driver has a zone they are responsible for. Some of the drivers are assigned to state routes in the city since there is a contract in place for the street department to maintain the roads. The street department is then reimbursed for the use of the equipment, overtime, and material used which is invoiced at the end of the month by administrative assistant Michaela Thomas.
The employees are occasionally moved around by Marlowe so they will be familiar with all the routes in the event someone cannot make it in for whatever reason.
Hilbert gave an update on the salt currently in house for use.
“The salt bin is full right now,” said Hilbert. “We have approximately 1,100 tons of salt in that bin. When we get down to a certain point, we call and have a purchase order in place for 400 tons that we can call for and another 400 tons in reserve. There is a depot in Knoxville that the salt is floated into on the Tennessee River that the salt comes from. We call them and they bring it to us.”
He went on to say that staying on top of the snow from the time it starts falling is key.
“You have to stay on it,” Hilbert said. “The snow has to get deep to be able plow. If not it will wear your blade down. These guys stay on the routes until they are clear. If the snow continues, they stay on the route because we don’t have another 14 people to take their place. There have been times that we have been here for 36 hours. We tell them if they get tired to come back here to the shop and rest awhile. We have never had an accident knock on wood. When traffic can move like it needs to and the routes are clear then we will go home.”