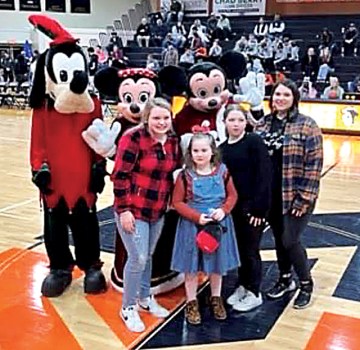 Contributed Photo Christlyn Hooper-Hill and her family take a photo with Mickey and the gang during the Make-A-Wish Foundation Wish Reveal. 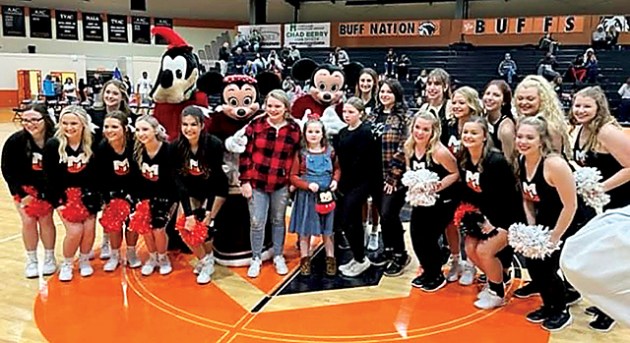 Contributed Photo Christlyn Hooper-Hill and her family pose with Disney Characters and the Milligan University Cheer and Dance teams. The night was sponsored by the Make-A-Wish Foundation, Carter County Banks and the Bank of Tennessee along with Milligan University.

By Ron Marvel
Star Correspondent
If you were at Milligan University this week for the Montreat game, you had the opportunity to first hand witness the Christmas spirit as 8-year-old Christlyn Hooper-Hill was given an early Christmas present as the East Tennessee Make-A-Wish Foundation, Carter County Bank and Bank of Tennessee and Milligan College came together to make a special night for little Christlyn. As Christlyn and her family gathered during intermission of the men’s game, at the half-court line of Tuesday’s game, her eyes got big as saucers as she and her family were joined by Mickey, Minnie and Goofy in their Christmas garb. Little Christlyn was then surprised with the news that she and her family would be flying out of Knoxville Saturday night to spend an all-expenses-paid week at Disney World and the Make-A-Wish Foundation’s own resort in Kissimmee, Fla., the “Give Kids the World Village” which has its own amusement park and water park for ill children and their families who want to visit Central Florida and where families can recapture memories that may have been missed due to their child’s illness.
This night was part of the Green Game that Carter County Bank sponsors each year along with Milligan University to promote local non-profits. This year the Milligan Men’s Basketball team voted to highlight the work of the East Tennessee Make-A-Wish Foundation. Jennifer Greenwell, PR and Event Manager for Carter County Bank, spoke about the CARES initiative. Jennifer shared about the bank’s desire to help support the community. “We are so proud to be part of the community and opportunities like this are a prime example of the bank’s commitment to community support.”
Brett Mayes, board member with the Make-A-Wish Foundation, spoke about his involvement with the non-profit and how the Make-A-Wish Foundation Wish Reveal is such a special moment. “For a board member to get to be a part of the Wish Reveal is the highlight of our work.” In order to be granted a wish a child has to be vetted and be referred by her medical providers. This summer a 12-year-old Elizabethton boy, Levi Markland, had his wish granted as a basketball court was built in his backyard. Mayes went on to share more about the East Tennessee Make-A-Wish Foundation work. “Currently, our Wish pipeline is backed up with over 200 wishes. COVID-19 and all the limitations that came with set us back.” He also shared that the kids do not have to be terminal to have a wish granted and that these wishes can be a big part of their healing process.
For Christlyn Hooper-Hill, who suffers from a genetic disorder, this will be a night and a Christmas that she and her family won’t quickly forget. “We had waited five years for the Wish Reveal, and she is super-excited; this just shows her hope,” her mother, Jamie Hooper, shared. She went on to express her deep gratitude for all those involved. “I just want to say thank you for everyone making her feel so special tonight.”