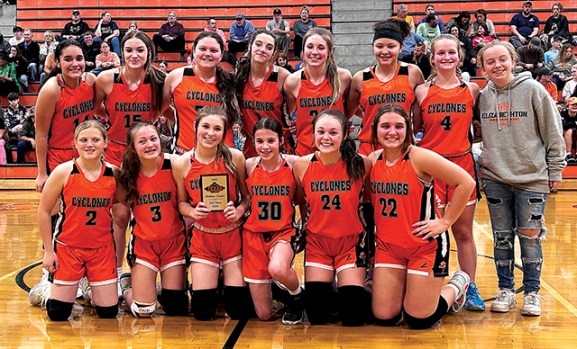 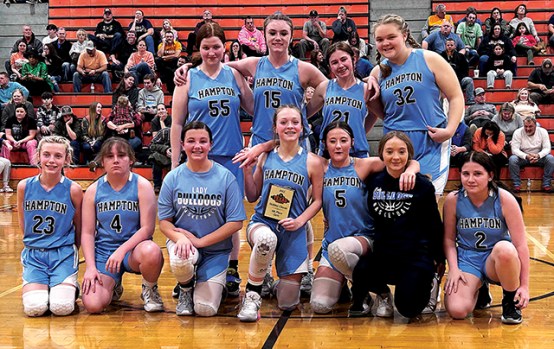 Hampton Elementary ladies take fourth place in the Texas Roadhouse Christmas Tournament after a 45-30 loss to TA Dugger in the Consolation Game. 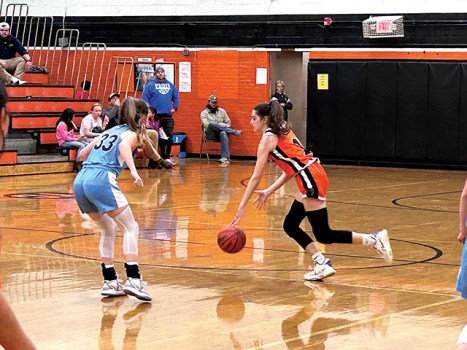 Adrian Heading pushes the ball up the floor while Lady Bulldog MacKenzie McClain closes in. 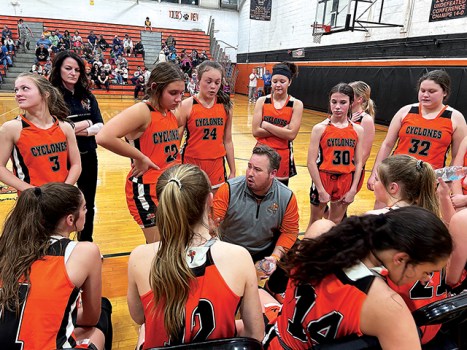 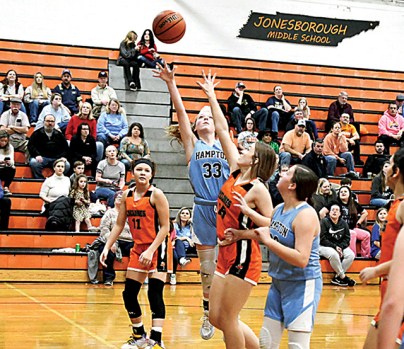 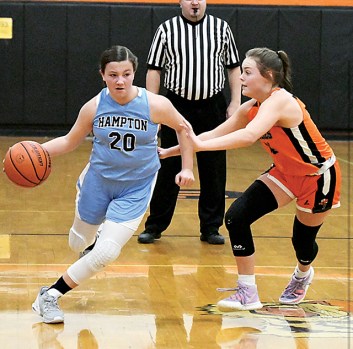 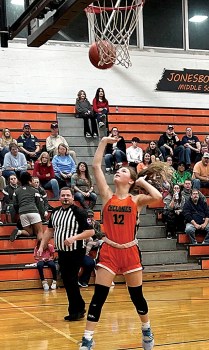 Rylee May gets an easy two after a Cyclones steal. 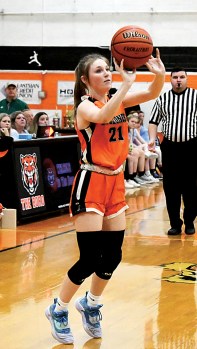 Reagan May looks to add to her assist total in the second period as she finds an open teammate down in the paint.

By Ron Marvel
Star Correspondent
TA Dugger 45 Hampton 30
After TA Dugger lost to the Sullivan Central MS Cougars, an all-Carter County game was set for third place. TA Dugger was able to jump out to a 9-0 early lead in the contest. Molly Wallin was able to do damage inside to jump-start the contest for the Cyclones and Rylee May would hit 3 of 4 free throws in the early going. Hampton would get on the board when McClain would hit a short jumper to put the score at 12-2 at the end of the first.
The Lady Cyclones would continue to find the open person off the Bulldogs press. Londyn Taylor would hit a big three and Molly Wallin would continue her aggressive play inside to push the lead up to 22 at the half. The Lady Bulldogs would show some fight in the second half as they would get their full-court pressure working, taking advantage of Lady Cyclone turnovers. Birchfield would get things started for the Bulldogs hitting a running lay-up through a crowd. Daisy Parks would hit a long-distance three-pointer at the 4:32 mark of the third period, allowing TA Dugger’s Coach Matt Fox to make a mass substitution. The Lady Bulldogs would take advantage closing the lead down to 10 off a Natalie Nickels jumper. Coach Fox would respond by putting his starters back in at the 1:01 mark of the third period. Lady Bulldogs coach Courtney Hayward would talk about her team’s fight in closing the lead down to 10. “We can’t fold; I told them we are better than this we played the best D we have played in a while; we are small and have to have those traps.”
The fourth period would see the Cyclone push the lead back to 14 as Wallin would grab the offensive rebound and go up through a crowd for the bucket. Hamptons Birchfield would hit an overhand layup to close the Cyclone lead back to 12 but they could get no closer. Shooting/point guard Rylee May would talk about her team’s attitude throughout the game “we passed the ball well and played together well, we are always encouraging one another.”
Looking to close the game out Dixie Hartley would hit a bank shot and Molly Wallin a reverse lay-up to push the lead to 16 at 5:06 of the 4th period. Taylor would then hit an 18-foot jumper at 2:21 of the final period to close the door. Jr. Lady Cyclones Molly Wallin would lead the way with 16, while Rylee Ray would chip in 12, while the team would go an impressive 18 of 35 shooting from the field. Reagan May would lead do a lot of the dirty work defensively for her team. For the gritty Lady Bulldogs Mackenzie McClain would help keep her team in it scoring 12 on the night while Danielle Hartley would chip in six. Postgame Coach Fox would speak about his team’s ability to close the door tonight and walk away with the hard-fought win “we got out our wits a little bit, but it starts with everybody for the sixth grade to the eighth grade, we settled down and settled down, we have to play at our level and have confidence in each other.”