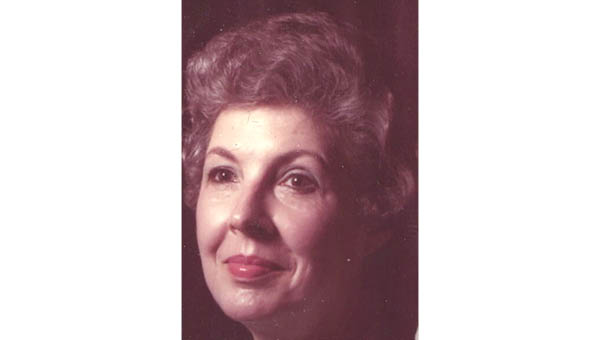 Ruth Bryson Ritchie, 93, of Elizabethton, went to be with her Lord on Friday, December 23, 2022, from Ivy Hall Nursing Home. She was the daughter of the late Charles Thomas “CT” and Irene Higdon Bryson and was born in Franklin, N.C., on April 5, 1929. In addition to her parents, she was preceded in death by her husband of 69 years, Sam Q. Ritchie, and a sister, Mildred Moore. Ruth retired from WBEJ Radio Station as the General Manager after 40 years of service. During her many years there, she was an on-air personality for the “Who’s New in Pink and Blue” and the “What’s Cooking” programs. She also worked as a bookkeeper at Motor Parts.
Ruth was a member of First United Methodist Church since 1948 where she worked in many positions in the church as was needed.
During her life, Ruth served on several organizations in the community including the Elizabethton City Council where she served as Mayor Pro-Tem from 1977-1981. She also served on the Carter County Memorial Hospital Board Control in 1981 as well as the Board of Directors for Northeast Community Services Agency and the Board of Directors for Elizabethton Public Library. Ruth was honored as the Outstanding Female Citizen of Carter County from 1979-1980 and the Business and Professional Women Woman of the Year in 1981.
Those left to cherish her many memories include a son, Sam Q. Ritchie II of Elizabethton, and a grandson, Nikolas Ritchie and wife Savannah of Chicago, Ill. Several nieces and nephews also survive.
A service to celebrate the life of Ruth Bryson Ritchie will be conducted at 1 p.m. Friday, December 30, at Tetrick Funeral Home, Elizabethton, with Rev. Raymond Amos officiating. Music will be under the direction of Mr. David Arney. The family will receive friends from noon until 1 p.m. Friday, prior to the service.
The graveside service and interment will follow the service at Happy Valley Memorial Park (Crown Section). Active pallbearers will be selected from family and friends. Honorary pallbearers will be the staff of Ivy Hall Nursing Home. The family would life to extend a special thank you to Judy and Victor Deloach and the employees of Ivy Hall Nursing Home for the love and care shown to Ruth during her residency there. Those who prefer memorials in lieu of flowers may make donations to the Elizabethton/Carter County Animal Shelter, 135 Sycamore Shoals Drive, Elizabethton, TN 37643. Words of comfort can be sent to the Ritchie family through our website, www.tetrickfuneralhome.com.
Tetrick Funeral Home-Riverside Chapel, 211 North Riverside, Elizabethton, TN 37643 (423) 542-2232, is honored to serve the family of Ruth Bryson Ritchie.