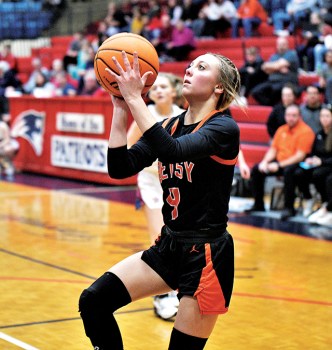 Star Photo/Ivan Sanders Elizabethton's Lina Lyon drives the baseline and pulls up for two points in the Lady Cyclone win over East. 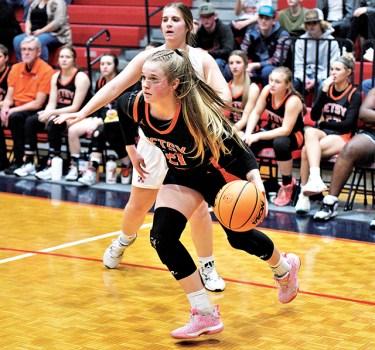 Star Photo/Ivan Sanders Elizabethton's Renna Lane drives the baseline around an East defender on her way toward the basket. 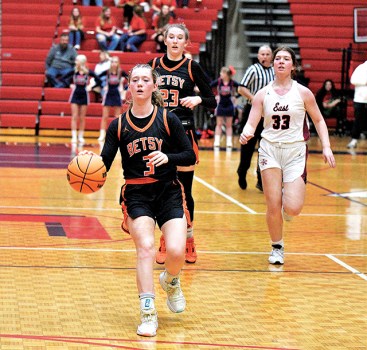 Star Photo/Ivan Sanders Lady Cyclone senior Olivia Holly brings the basketball up the floor after a steal on the East end of the floor.

Star Photo/Ivan Sanders Lady Cyclone Reiley Whitson lines up for a shot from behind the three-point arc. Whitson hit three treys in the contest. 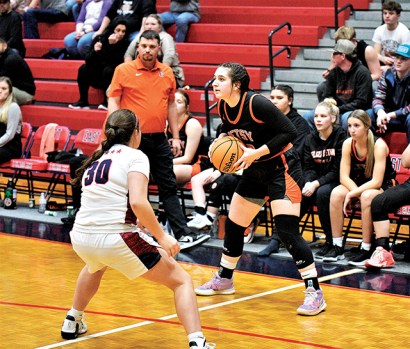 Star Photo/Ivan Sanders Lady Cyclone senior Maddie Fowler looks to swing the basketball out to the top of the key in front of the Lady Cyclone bench. 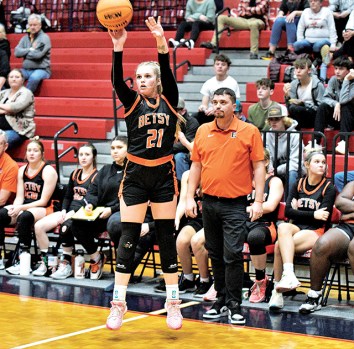 Star Photo/Ivan Sanders Renna Lane sends a three-ball on its way to the mark in front of Lady Cyclone head coach Lucas Andrews. 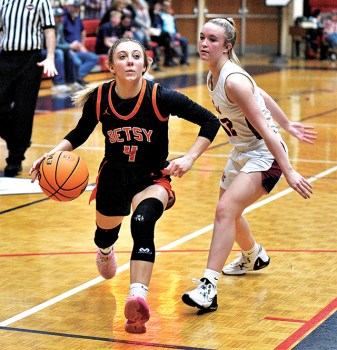 Star Photo/Ivan Sanders With her eyes on the bucket, Elizabethton's Lina Lyon drives past a Lady Patriot defender.

STAR CORRESPONDENT
BLUFF CITY – Anytime the Elizabethton Lady Cyclones and Sullivan East Lady Patriots lock horns, fans can count on one thing and that is a fast-tempo, three-point shooting showdown.
And that is exactly what happened Friday night when the two teams opened up the 2023 Great Lakes Conference girls slate at the Dyer Dome as the Lady Cyclones turned a sluggish first-quarter offensive showing into a 13-point road win, 59-46.
The first quarter opened up as both teams were looking to feel one another out in the opener as East managed to pull out to an early 9-8 lead at the end of the period.
Lady Patriot Jenna Hare, who was recognized for being only the second girl in Sullivan East history to surpass the 2,000-point plateau, along with adding 1,000 career rebounds before the game, put her team out front with five points in the first eight minutes.
Meanwhile, Olivia Holly was loading it up from the outside in the quarter hitting two deep treys to keep the Lady Cyclones close.
The Lady Cyclones defense in the second quarter was the early turning point in the contest as Elizabethton managed to capitalize on Lady Pat turnovers to reel off a 20-7 scoring outburst to take a 28-16 lead to the locker room at the break.
Leading the charge for Coach Lucas Andrews in the quarter was Renna Lane who netted seven points. Lina Lyon recorded five as well. Maddie Fowler and Reiley Whitson tallied one trey apiece while Katie Lee added a deuce.
Coming out of the break, the Lady Pats began to find their range from behind the three-point arc as they dropped in four in the third quarter but they forgot one thing and that was to guard Lady Cyclone point guard Lina Lyon.
Lyon drove in and around Lady Pats on her way to 10 points in the period to spark the Lady Cyclones in adding four more to their lead as Elizabethton outscored East 20-14 in the quarter and took a 48-30 lead into the final eight minutes of play.
The Lady Cyclones actually built their advantage to over 20 points in the final stanza before the Lady Patriots sliced the lead to the final margin of victory for Andrews squad.
Lyon led the Lady Cyclones with a team-high 21 points in the game while Lane finished in double-digit scoring with 10. Whitson finished with three treys for nine points with Holly and Marlee Mathena dropping in six points each. Lee and Fowler finished with four and three points respectively.
East was paced by Hare with a game-high 28 points in a losing effort. Olivia Ashbrook added six points while Miley McCarter finished with four points.