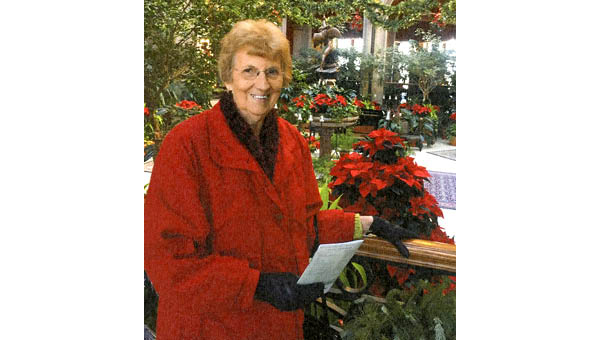 On the evening of January 7, 2023, Alsie Jackson Byrd, 89, was called to be with the Lord at her home in Elizabethton. Alsie was born on April 7, 1933, which was also her mother’s 43rd birthday. She was the daughter of the late James T. and Effie Jackson.
Alsie graduated from Elizabethton High School in 1952, and enjoyed attending all their class reunions throughout the years. Alsie loved being a “Fighting Cyclone.” After graduation, she went to work for Dr. R.J. Allen at the Franklin Clinic. Alsie truly loved this time in her life and the patients and families that she considered friends. She would often talk about going on house calls with Dr. Allen and being paid in chickens, vegetables and most anything but money. Alsie married Jack C. Byrd on January 31, 1959 and they moved to Cocoa, Fla., where Jack worked at the Kennedy Space Center. While in Florida, Alsie lived her best life growing lemon trees, tropical flowers and enjoying all that the beach had to offer. She loved her car turned beach buggy and would often turn the water hose inside her car to clean it — much to Jack’s chagrin.
After their daughter Lisa was born in 1966, they returned to Elizabethton where Alsie was a homemaker, PTA chairman, Girl Scout leader, and EHS band parent. Anything Lisa did, Alsie was actively involved and always found a way to organize all activities with ease. In 1980, she started working for H&R Block where she worked until she retired at the age of 80. Alsie always said it was the best job, as she could work during the winter and play in the summer. Her H&R Block friends were her family and she spent time with many of them after retirement.
In 1995, she went from Alsie to Nana as the joy of her life was born. Nana loved her “Precious” Emily more than anything in the world. Nana became part of every aspect of Emmy’s life. Nana was always by Emmy’s side in whatever she did — from taking her to field trips in preschool, traveling with volleyball teams to multiple states in high school, and then becoming part of Emmy’s Clemson family during college. Nana loved a good football tailgate because she always wanted to “be where the action was.” She traveled to many Clemson games including bowl games to Phoenix, Dallas, and New Orleans. She may have even been found singing the Clemson Fight Song at Pat O’Briens on Bourbon Street. Emmy and Nana attended the 2016 Clemson National Championship together and Nana said it was one of the best nights of her life “being with her girl.”
Along with her family, the most important part of her life was her church. Alsie was a member of East Side Baptist Church since 1959. She loved her Victory Sunday School Class and her church family very much. Alsie was a strong prayer warrior and read her Bible daily. It could always be found beside her chair.
She was preceded in passing by her parents, James and Effie Jackson; brothers, James “Junior” Jackson and Norman Jackson; sisters, Gaylene Stanbery and Gwina Ellis; and Jack, her husband of 50 years.
Left to cherish her memory and all their wonderful times together are her daughter and “son” Lisa Byrd Williams and Michael Williams, and granddaughter and “grandson” Emmy Williams Monroe and Jordan Monroe, and granddog, Lyla June. Alsie also has several cousins, nieces, nephews, great-nieces and great-nephews who were very dear to her. In particular her nephew, Larry Stanbery, who faithfully called to check on her every night for many years, and niece, Sherry Ellis Hubbard, who supported the entire family with her love and care.
The family would like to thank the caring staff at Caris Healthcare and Ivy Hall Nursing Home. The family would also like to express their deepest appreciation to Dr. Israel Garcia as well as caregivers, Lisa Ducey, Vicky Thomas Prater and Brooke Smith. Memorial contributions may be made to East Side Baptist Church, 1509 Siam Road, Elizabethton, TN 37643 or www.eastsidebaptist.org/make-a-donation/.
A celebration of Alsie’s life will be held at 7 p.m. Wednesday, January 11, at Memorial Funeral Chapel in Elizabethton with Pastor Tim Adkins officiating. There will be a graveside service at Happy Valley Memorial Park on Thursday, January 12, at 11 a.m. with Rev. Ronnie Campbell officiating. Pallbearers will be Jarrod Ellis, Randy Jackson, Jordan Monroe, Hunter Nelson, Chris Stanbery and Michael Williams. Honorary pallbearers are the men and women of East Side Baptist Church, and neighbors and friends of Superior Acres Subdivision. The family will receive friends at the funeral home from 5 to 7 p.m. Wednesday, prior to the service. Family and friends will assemble at the funeral home at 10:20 a.m. Thursday to go in procession to the cemetery. Condolences may be sent to our website at www.memorialfcelizabethton.com
Memorial Funeral Chapel is serving the Byrd family.