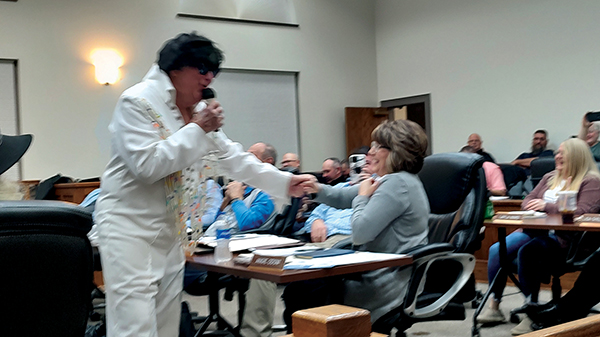 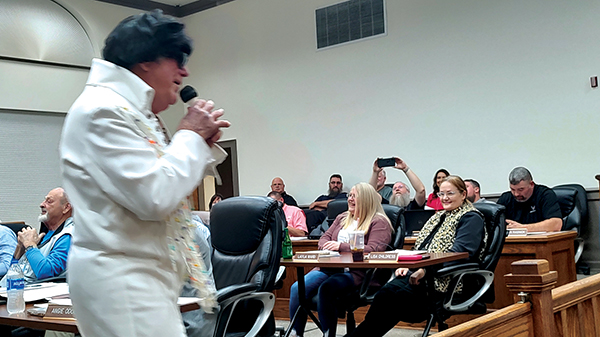 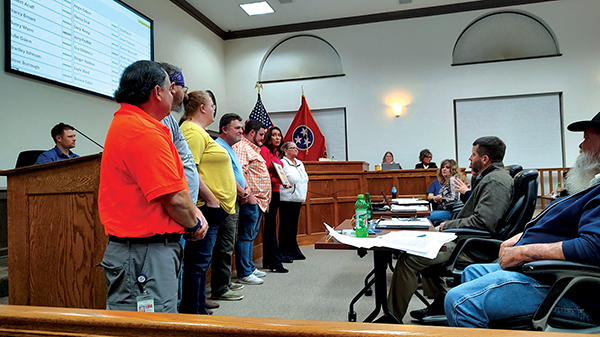 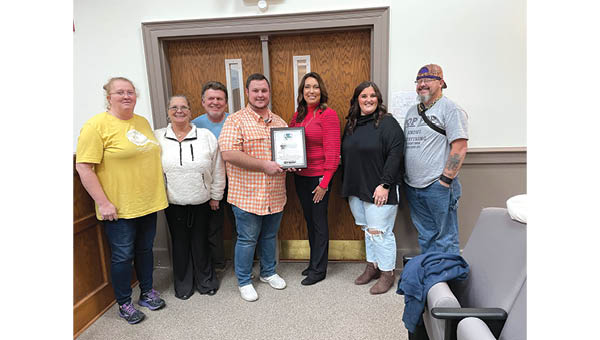 BY ROBERT SORRELL
Star Correspondent
The Carter County Commission recognized two local organizations on Tuesday for their services during the late December 2022 Arctic cold snap.
Mayor Patty Woodby presented a plaque of recognition for Harmony Free Will Baptist Church. During the Christmastime cold snap, the church opened its doors and sheltered several local residents.
Temperatures dropped to near zero in Carter County in late December, causing water pipes to freeze and burst, limbs and power lines to fall and residents to seek warmth. The church provided warm beds, food and fellowship.
Woodby said she believes the church saved lives during the sub-zero temperatures that lasted several days in Carter County.
Church members said they enjoyed helping those in need and said they would continue to open the church’s doors as a warming shelter.
Carter County Emergency Management Agency Director Billy Harrell presented another plaque to local radio station WBEJ for its contributions to the community. During the cold snap, Harrell said he asked the radio station to advise the public of warming stations in the county. The station aired the public service announcement several times, he said.
Harrell said many elderly residents listen to the radio to get their information, rather than other sources, such as social media.
Harrell also explained to commissioners about when the county opens emergency shelters. He noted that shelters are only opened in Carter County when a disaster occurs, such as floods and tornadoes. Shelters are usually not opened during cold spells, he said.
However, Harrell told commissioners that the county can work with organizations, such as Harmony Baptist Church and volunteer fire departments, to open warming shelters during cold weather.
The American Red Cross can also open emergency shelters in the county.
Communications Officer Mark Ridings provided commissioners with a brief update on the purchase and installation of a new radio system for first responders. The project is still in the early stages as he works with vendors and emergency agencies. Ridings said on a scale of 1-to-10, Carter County is currently about 2.5 to 3 in the process of installing the new system.
Ridings answered a couple questions from commissioners, including informing them that the county is not purchasing new radios for Elizabethton police or fire, but the city can choose to join the system.
The commission approved several motions from the Budget Committee. Commissioners approved motions to replace the server and a workstation for about $11,000 for the Trustee’s Office, fund $69,781 toward a new dozer at the landfill and $20,000 for a new parking lot at the courthouse.
Commissioners also approved a resolution to create new tiny home regulations in Carter County.
Former Commissioner Charles VonCannon provided a presentation on the contributions of Tennessee entertainer Elvis Presley. To close his presentation, VonCannon removed his coat to reveal he was wearing a white Elvis jump suit and wig. VonCannon then serenaded commissioners with two Elvis classics.