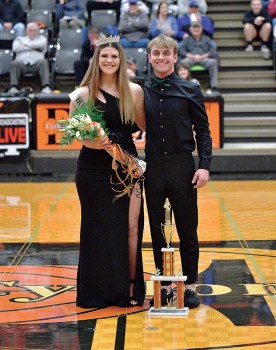 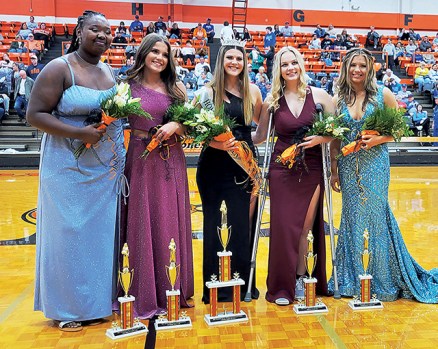 STAR CORRESPONDENT
The Elizabethton Cyclone basketball teams, along with the student body, celebrated Homecoming 2023 when the Cyclones played host to the West Ridge Wolves at John Treadway Gym before a large crowd.
During halftime of the boy’s contest, each attendant and their escort was introduced to those in attendance, capped off by the announcement of the Homecoming Queen and her court.
Miss Jayci Bowers was selected as the 2023 Homecoming Queen by the student body. Bowers’s escort for the evening was Mr. Kaleb Hambrick.
Selected as the Freshman Princess was Miss Jamira Smalls, while Miss Gracie Whaley was named the Sophomore Princess. Miss Reiley Whitson was crowned the Junior Princess, with Miss Sage Nave named as the Senior Princess. Each Princess and the Queen received a bouquet of flowers and a trophy.
The Cyclones split the evening contests with the girls winning while the boys suffered a defeat.