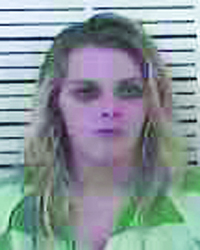 A 19-year-old woman was arrested Friday after police said she admitted inhaling aerosol fumes at the time of a wreck.
Dreama Barnett, 19, 135 Cedar Grove Road, Johnson City, was arrested around 12:30 a.m. by Carter County Sheriff’s Department Deputy Samantha Maney and charged with driving under the influence, possession of Schedule VI drugs and the illegal use of an inhalant.
Officers encountered Barnett after responding to a report of a car wreck on Cedar Grove Road, and identified Barnett as the driver of the vehicle. Maney said in her report that Barnett “seemed to be impaired” when officers spoke to her regarding the accident.
“Ms. Barnett admitted to marijuana and air duster being in her vehicle and gave consent to search,” Maney said. “Lt. (Keith) Range then discovered a can of air duster, cold to the touch, a green leafy substance that appeared to be marijuana and a pipe containing residue that had a strong odor consistent with marijuana.
“During the accident investigation Ms. Barnett then admitted to me smoking marijuana during the day and huffing the air duster at the time of the accident.”
Barnett was taken into custody and transported to the Carter County Detention Center, where she is being held on a $1,500 bond.

Two visitors to Wilbur Dam reported to the Carter County Sheriff’s Department their car was broken into while visiting the... read more