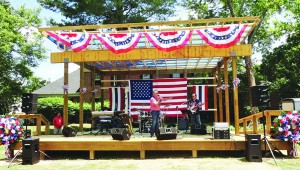 The Jerry Pierce Band took the state at Covered Bridge Park during the 4th of July festivities. It turns out he state was missing its opening act – approval from the Historic Zoning Commission.

The new Covered Bridge Park stage hosted its first event during Carter County’s Independence Day Celebration.
But it turns out the stage itself missed its opening act.
Under Historic Zoning Commission guidelines, all new structures inside the Historic District must have commission approval, something the stage lacks.
Director of Planning Jon Hartman said that because of the rush to complete the Covered Bridge Park stage for this year’s Fourth of July celebration, a request for a certificate of appropriateness was not submitted to the commission before the stage was completed.
The commission planned to vote to retroactively approve the request during Monday night’s meeting, but pushed the vote to next month after Elizabethton resident Tom Cowan had objections. Cowan said the city failed to meet a requirement that all applications for such requests be filed 21 days before they are heard by the commission.
Cowan also said he has concerns about the potential violation of city noise regulations when bands play on the stage.
The regulation he is referring to is Municipal Offense, Title 11, Section 202, which is an anti-noise regulation that states that “the playing of any radio, or musical instrument, or other device for the amplification of sound that could disturb individuals in its vicinity, particularly during the hours of 11 p.m. and 7 a.m., is not permitted.
The regulation also states that “yelling, shouting, hooting or singing on the public streets” is not permitted during the same hours.
In response to Cowan, Chair Sarah Baker said that the commission could not make any ruling on noise violations and could only rule whether the stage fits in with surrounding structures.
The commission is scheduled to vote on the stage during its next meeting at 6 p.m. on Aug. 18, at City Hall.

An Elizabethton woman who pleaded guilty to five counts of aggravated statutory rape was granted judicial diversion Monday, which could... read more