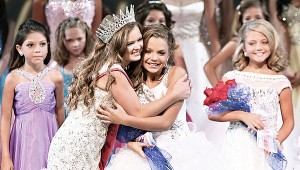 The daughter of Randall and Jancey Bennett, Cagney said, “This is one of the biggest days of my life!” adding, “I couldn’t believe it when they called my name.”

She was crowned Little Miss Tennessee United States on April 7 at the Country Tonite Theatre in Pigeon Forge. She is a a fifth grade, Superior Honor Roll student at West Side Elementary School. She is a member of First United Methodist Church, Elizabethton, where she is actively involved in the youth program. She is a member of the Watts Showcase Dancers, a Level II Edge Gymnast, and a Junior PeeWee Cyclone Cheerleader.

Cagney will continue her reign as Little Miss Tennessee United States until April 2015, at which time she will crown her successor.

For the national competition, 22 young ladies representing their states converged upon Washington to compete over the Independence Day Weekend. While there, Cagney participated in several days of competitions and fun events, including a delegate pool party, patriotic runway competition, Capitol Hill 4th of July parade, pajama glam party, a fireworks display at Long Bridge Park, sportswear competition, interviews and an evening gown competition.

“The girls on the stage with me were some of the most amazing girls I have ever met,” she said of her fellow competitors.

Cagney can be followed on her journey throughout the coming year on her Facebook fan page: Cagney Bennett, Little Miss Tennessee United States 2014.

The Elizabethton High School Class of 1964 is preparing for its 50th graduation anniversary celebration. In order to complete plans... read more