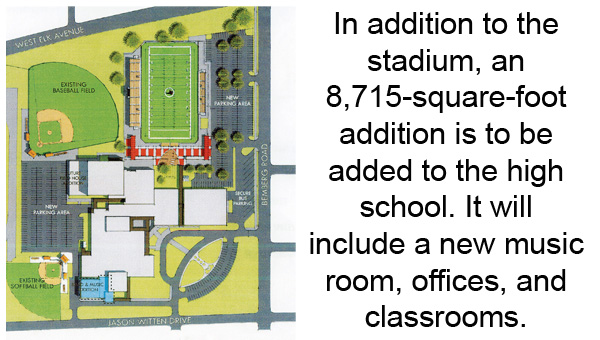 Big things could begin this fall – if all goes as planned.
City School Superintendent Ed Alexander said the groundbreaking for Elizabethton High School’s new stadium and music room could take place toward the end of September.
But before construction of the two facilities can begin, he said, specific plans for each must win approval from the Elizabethton Planning Commission.
“We can’t even get specific plans to the planning commission until their September meeting, which I believe is early in the month,” said Alexander. “We can’t even put a stake in the ground until the commission approves our plans.”
Stadium-site plans prepared by Architect Thomas Weems shows a new parking lot being located on the western side of the school campus, in between the track, baseball field and softball field.
The stadium will take up half of the existing student parking, but with the parking spots left from the existing lot and the new spots from the new lot there, will be 91 new spots overall.
“The good thing about the new parking is, depending on what is going on, if people are going to the basketball gym or the new stadium, it will provide parking on both sides of the school,” says Alexander. “We will have as little traffic congestion as possible.”
But it could be hard for students to find parking this fall, when the old parking lot is torn up in preparation for construction. Alexander said that issue could be helped by beginning work on the new lot before tearing up the old one.
During this month’s school board meeting, concerns were raised about the stadium’s close proximity to West Elk Avenue, but Alexander said he feels that that won’t be a problem.
“Being close to West Elk Avenue is a godsend,” he said. “Fifty to sixty percent of Carter County and Elizabethton drive on West Elk every day. And they will be watching this happen, and then, of course, we have the Tweetsie Trail running through there too.”
In addition to the stadium, an 8,715-square-foot addition is to be added to the high school. It will include a new music room, offices, and classrooms.

Photo by Brandon HicksThese voters are some of the nearly 2,500 residents to take advantage of early voting to cast... read more