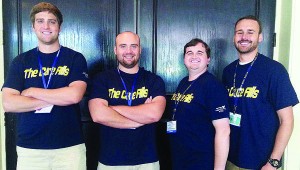 Answer: Win a statewide championship.
Question: What did a team of students from East Tennessee State University’s Bill Gatton College of Pharmacy at East Tennessee State University do this week?
Competing in the Jeopardy-like format of the fifth annual NASPA/TPA Student Pharmacist Self-Care Championship at the Tennessee Pharmacists Association annual meeting in Hilton Head, S.C., on July 22, “The Cure Alls” outscored the other five Tennessee colleges of pharmacy.
To win, pharmacy students answered questions that demonstrated their knowledge of various over-the-counter medications and products as well as their ability to identify and explain aspects of self-care treatments.
The National Alliance of State Pharmacy Associations and the Nonprescription Medicines Academy partnered in 2006 to launch the competition. The event is endowed by Proctor & Gamble and is intended to promote interactive learning. Members of the winning team from ETSU are Scott Brewster, Aaron Garst, Brandon Farmer and Ryan Smith. Serving as alternates were Abby Surles and Allison Philips. Dr. Katelyn Alexander, an assistant professor at the College of Pharmacy, serves as the team coach.
Thirteen student pharmacists from ETSU attended this year’s TPA convention and exposition along with a handful of faculty and administration.

Ward: Veto ‘put us in limbo’

With the start of school for Carter County students just two weeks away, the mayoral veto of the county’s budget... read more