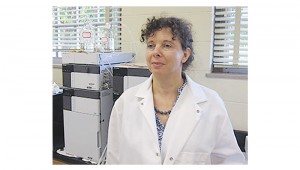 An East Tennessee State University professor has received a grant to study the relationship between DNA and positively-charged proteins.
Dr. Marina Roginskaya, assistant professor of physical chemistry at East Tennessee State University, has received a $9,750 grant from the university’s Research Development Committee to study DNA, deoxyribonucleic acid, a major hereditary unit of living cells that encodes the genetic information of all living organisms.
Roginskaya explains that the structural integrity of DNA is crucially important for a normal organism’s functioning and for passing correct information to the next generation. DNA damage has been unequivocally linked to a wide spectrum of conditions, including cancer, autoimmune diseases, neurodegenerative diseases, cardiovascular diseases, chronic fatigue syndrome and aging. For this reason, research on DNA damage and protection against this damage is important for human health.
“DNA in living cells is tightly packaged in a DNA-protein complex known as chromatin,” Roginskaya says. “Histones, DNA-binding positively-charged proteins (PCPs), are building blocks of chromatin. It has long been known that histones and other DNA-binding PCPs protect DNA from radiation damage and from other types of oxidative damage, but the mechanism of this protection remains poorly understood.”
Through the grant, Roginskaya hopes to unravel chemical mechanisms that contribute to DNA protection by PCPs. The project will support the experimental work of an ETSU graduate student and should help recruit more students to the field, Roginskaya says.
A native of Moscow, Russia, Roginskaya holds a Ph.D. from the University of Rochester in New York.
Grants awarded by the ETSU Research Development Committee support and encourage research that includes the sciences and non-sciences, including the humanities and the fine and performing arts.

Sycamore Shoals program offers look at some of our wild neighbors

The mountains of East Tennessee are filled with an almost endless variety of animal and plant life. Some of these... read more