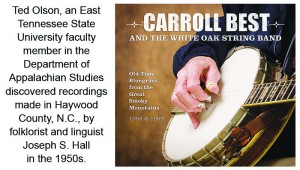 Ted Olson, an East Tennessee State University faculty member in the Department of Appalachian Studies, has spent many hours searching the university’s Archives of Appalachia for musical gems. After a year, he made quite a find.
According to Olson, the recordings he discovered, made in Haywood County, N.C., by folklorist and linguist Joseph S. Hall in the 1950s, represent “the missing link between old-time string music and bluegrass, two music genres … whose connections are not widely understood.”
These recordings, featuring music performances by five-string banjo master Carroll Best and some of his friends, document that Best was a pioneer of the melodic, three-finger banjo style. Used today by numerous banjo players, including Bill Keith, Bela Fleck and Tony Trischka, the melodic style allows the banjo player to play more notes than the more widely known “Scruggs-style” bluegrass banjo.
A new CD, “Carroll Best and The White Oak String Band: Old-time Bluegrass from the Great Smoky Mountains, 1956 and 1959,” is a collection of informal jam sessions that occurred during Hall’s second and third forays into the Smokies.
In 1956, Hall recorded such local musicians as Best, destined to become one of the most significant banjo players of his generation, along with his wife, Louise Best, S.T. Swanger and Don Brooks, while in 1959, he recorded Best, Raymond Setzer, Billy Kirkpatrick and French Kirkpatrick in 1959.
Hall tagged both of these ensembles The White Oak String Band.
Released by the non-profit Great Smoky Mountains Association, the CD contains a 64-page booklet written by Olson, and includes 37 songs. Among them are old favorites “Tennessee Wagoner,” “Arkansas Traveler,” “Old Joe Clark,” “Soldier’s Joy,” and newer material like “Banjo Boogie” and “Smoky Mountain Melody.”
Proceeds from sales of the CD will be donated to the Great Smoky Mountain National Park.
For details about the CD, visit the GSMA website at http://63.134.216.182/news/carroll-best-and-the-white-oak-string-band.

The East Tennessee Children’s Choir performed three concerts in Greece during the past season, and auditions are scheduled for Aug.... read more