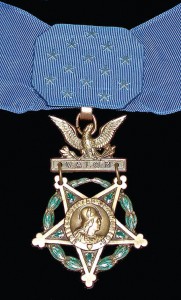 Elizabethton High School is about to have a rare honor – playing host to one of just 78 living Medal of Honor recipients next week.
EHS is one of only seven Tennessee high schools so honored, earning the distinction through the hard work of students in Alex Campbell’s Special Topics in American History Class last year.
The class studied the Medal of Honor, veterans who had received the award and what it took to receive that honor. After studying the award for an entire semester, the class held a public ceremony to recognize some of the community’s everyday heroes.
It was their work on that project that got the attention of the Medal of Honor Foundation, and the resulting visit of one of those recipients to the school on Friday, Sept. 12, at 10 a.m.
The school will host Lt. Col. Bruce Crandall, who was commander of a helicopter company in the Battle of Ia Drang during the Vietnam War. Crandall, along with others in his unit, flew into a “hot” battle zone to evacuate more than 75 wounded soldiers after being ordered not to fly into the area because it was too dangerous.
Campbell pointed out that Medal of Honor recipients are rare, with only 78 living recipients in the country.
“In a country of 326 million people, that is pretty rare and it is special to be able to have one of those men here with us at the school,” he said. “There is a lot of bravery in the military, but these men have been distinguished above the others.”
Crandall is scheduled to arrive at the school via military helicopter, either a Blackhawk or a Vietnam-era Huey.
From there, he will be treated to a breakfast, which a small number of students will be able to attend. Campbell said the students had been writing essays to explain why it was so important for them to have a meal with the Medal of Honor recipient.
“I wanted that to go to students who really appreciated what it meant,” Campbell said.
After the breakfast, Crandall will speak during an assembly sharing his experience with the students and the public that attends.
Campbell said the class had wanted to bring in a Medal of Honor recipient to the citizens award recognition last year, but could not. The delay could have worked for the best because the visiting Medal of Honor recipient will be treated to a show by the EHS Betsy Band, which is honoring Vietnam veterans with their show this year. Their program will also include a 12-section replica of the Vietnam War Memorial Wall.
Campbell said he was also planning for other special events to help make the visit to EHS a memorable one for Crandall.
“I guarantee that no other school will have a band that will play a show dedicated to Vietnam veterans,” Campbell said. “We want to make this as special as it can be because it is as special as it is.”
Campbell said the event was also open to the public with an entire section of the gym open for visitors. He said around 800 seats would be available.