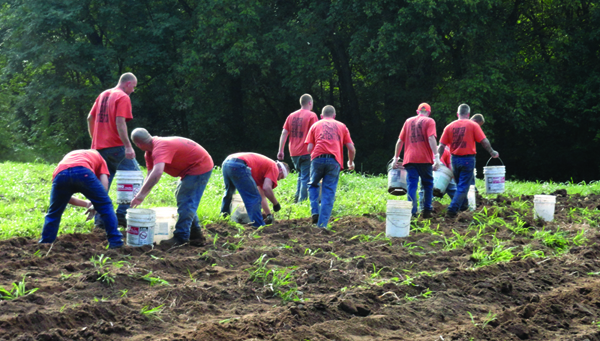 Photo by Abby Morris-Frye
Carter County Jail inmates were at work this past week picking up freshly dug potatoes.

More than 400 heads of cabbage, 100 bushels of beans, 50 to 60 bushels of tomatoes, 100 bushels of corn and about 130 bushels of potatoes.
No, that’s not a description of the produce section of a grocery store or even the items for sale at a local farmer’s market.
This is the result of another bountiful crop from the Carter County Detention Center’s garden.
The garden not only helps the detention center provide nutritious meals to the inmates held there, it also creates quite a savings for the taxpayers of Carter County, according to Capt. Thomas Smith, administrator at the detention center.
As shoppers have faced rising food costs, so has the detention center. Smith said the garden is a way that the county can help offset that added expense.
“If it was not for this garden, the monies we get in the budget would not cover the food costs,” Smith said.
According to Smith, the detention center receives grant funding to support the garden project along with some funding from the company that operates the jail’s commissary program.
“All total I would say we haven’t spent over $2,300 this year,” Smith said, adding that covers seeds, fertilizer and equipment.
The cost to plant and maintain the garden this year will be covered by savings created from just one of its crops.
Smith said the estimate the county received for potatoes came in at $18 to $19 for one bushel of potatoes.
“We planted 29 bushels on this patch right here,” Smith said Thursday morning at the garden. “We hoped to yield at least 130 bushels. The way it’s looking, we are going to easily exceed that.”
If the county had bought that many potatoes it would have cost between $2,340 and $2,470.
Inmate work crews were harvesting the garden’s potatoes on Thursday morning but Smith said many of the garden’s crops had already been harvested. However, he added, the garden isn’t through for the year. Smith said an additional 540 heads of cabbage have been set out for a fall crop.
In addition to the garden creating a cost savings for the county, Smith said it also provides other benefits.
“One of the most important parts of this program are these inmates,” he said.
Inmates who work with the detention center’s inmate labor program can have their jail sentences reduced by the judge who presided over their case. Shortening the time these inmates are held in jail also helps save the county money, Smith said.
The program also serves to educate the inmates, which can help reduce the possibility of repeat offenders.
“We are teaching them life skills,” Smith said.
“We teach them how to make the earth beneficial for them,” he added. “It is a program worth keeping because it benefits everyone.”
Smith said the garden is just part of the detention center’s program which provides free labor to the county as well as the city. According to Smith, the inmate labor provided through the program created $1.75 million in savings to Carter County and the City of Elizabethton through the use of inmate labor.