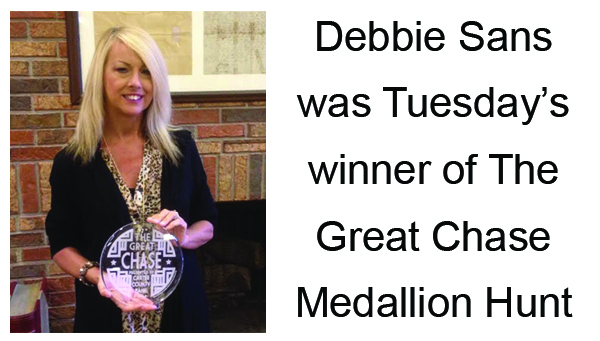 Today was the second for Carter County Bank’s Great Chase Medallion search. It was an extra special day for local resident Debbie Sans, who found the medallion after only two clues had been released.

With clues like “Where Stars Come Out,” and “Grab a Speaker,” Sans was able to locate the medallion hidden at Stateline Drive-In on Highway 19E. Sans won a $50 gift card and is the second qualifier for the $1,000 grand prize giveaway this Thursday at the Great Taste of Carter County. Jake Higgs was the first qualifier for the grand prize giveaway.

Play tomorrow and you could be the winner.

The Great Chase medallion for Tuesday has been found

Today’s Great Chase Medallion has been found! The Medallion was hidden at Stateline Drive-In on Highway 19E. It was found by... read more