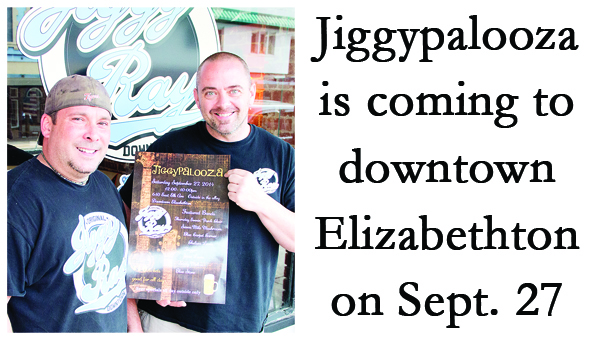 The owners of a downtown Elizabethton eatery are looking to start a September tradition with a mix of pizza and performances.
Oh, and then there’s Elvis.
Jiggy Ray’s will hold its inaugural Jiggypalooza on Saturday, an all-day event that will be held both indoors and outside in the breezeway.
Owners John Malone and John Seehorn said they hope this year’s festivities will mark the start of a local tradition that will grow each year.
“We hope to make it bigger next year,” said Seehorn. “We talked to everybody and hopefully, next year, we will be able to block the streets off, and, you know, add even more musicians, have more vendors and have some fun with it.
“This will be our first time doing it. And, hopefully, every September towards the end we will do a Jiggypalooza, and hopefully, it will grow into a cool festival for this town. You know, this is a beautiful city and there is no reason not to show it off.”
Patrons of the event can expect tunes from eight local bands, such as Thursday Evening Porch Choir, Seven Mile Mushroom, Blue Carpet Corner, Chelsea Lewis, Trigger, Jesse Lewis, Scotty Melton, and Blue Stone.
“All the bands have pretty good followings, so it is going to be fun,” said Seehorn. “They are all going to flip-flop around and take turns on the stage outside in the breezeway.”
Lighting and sound for the performances will be set up by Backyard Productions, which is owned by Charlie Coffman.
“Charlie has provided his time to make this event successful,” said Seehorn. “And we are very fortunate to have him because he is a phenomenal sound guy.”
Gates will open at noon and the event will end at 10 p.m.
Tickets are $10 and will get the purchaser admission into the event. Individuals can purchase tickets either at Jiggy Ray’s or from members of the featured bands.
Friday at 8 p.m., there will be a Jiggypalooza kickoff event that will feature local Elvis impersonator, Matt Elvis Dollar.
“He is coming with the full show,” said Seehorn. “I am talking about the full outfit, the light show and everything.”

The first clue for The Great Chase medallion hunt for Thursday, Sept. 25 is: You can hear a creek Good luck... read more