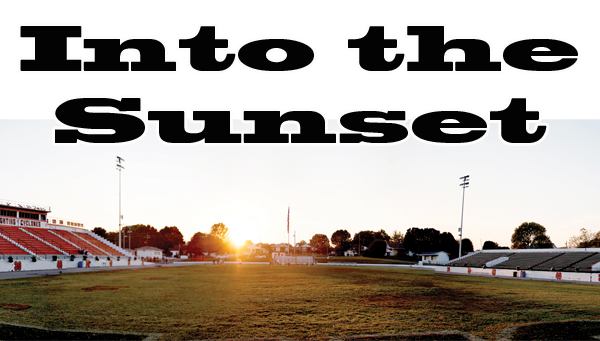 Photo by Bryce Phillips
Elizabethton will offer a formal farewell to its beloved Brown-Childress Stadium and Dave Rider Field during a ceremony at halftime of tonight’s Elizabethton-Happy Valley game.

It was 68 years ago that the ground behind T.A. Dugger Junior High School was broken in preparation for what is now known as Dave Rider Field at Brown-Childress Stadium.
And for those nearly seven decades, the stadium has provided a storied home for the Elizabethton High School Cyclones.
Tonight, with the construction of a new stadium set to begin in the near future, ’Betsy will say its formal goodbye to its old home during halftime at the Cyclones’ game with Happy Valley.
“There has been a lot of history at Dave Rider Field Brown-Childress Stadium,” said Shawn Witten, the Cyclones’ current head coach.
“There have been a lot of great football players, a lot of great coaches, a lot of great tradition, and there have been a lot of great football games up there,” he said. “You know, it is a sad time, but at the same time for us, you know all these schools that we compete against, they are doing renovation to their stadiums and renovations to their fields. So, it is about time that we got something that our kids have a long time deserved.”
According to Frank Merritt’s Later History of Carter County, on the night of Nov. 9, 1945, the EHS football team fell 34-13 to Kingsport, leading then-Elizabethton head coach E. Niles Brown to say, “We have little chance to remain in big time football without a new stadium.”
That same night, local businessman Roy Childress passed around a hat during the game to build support for a new football stadium. Merritt noted they raised $400.
Very much like present day, the path to a getting a new stadium wasn’t completely smooth. The Elizabethton City Commission initially voted 4-3 to not underwrite the facility, according to the book.
But the group changed its tune in February 1946 after a large majority of civic clubs and local organizations passed resolutions in favor of the stadium. This prompted the city’s governing board to unanimously vote to underwrite $32,000 of the needed $42,000, Merritt noted in Later History of Carter County.
That same month, a Stadium Commission chaired by Childress was formed, and consisted of Raymond C. Campbell, George F. Dugger, Condon Williams, Coach E. Niles Brown, Fred Moore and T.A. Ledford.
On May 27, the groundbreaking for the new stadium took place. However, on Oct. 1 of that same year, Childress passed away, sparking a movement to name the stadium in his honor, Merritt wrote.
In the Elizabethton Star, a letter to the editor written by the wife of Coach Brown was published. In the letter she wrote, “I can think of no finer tribute to pay to a man such as Roy Childress, for his untiring efforts and time put in on securing a stadium for the Elizabethton High School, than to name our stadium, ‘Childress Stadium.’ Let this be a memory to one of our most progressive and most loved citizens of the county.”
Childress’ daughter, Ann Robinson, said her father was considered a very caring man. She recalled a time when Childress owned a feed store, and everyone thought he was wealthy. However, after he had passed away, she said it came to light that he had allowed everyone to buy on credit, never calling on anyone to pay his debt.
“He was a very smart and caring man,” said Robinson.
In 1975, Childress Stadium added another name, the name of legendary coach “Mule” Brown.
Brown coached at EHS for 21 years, and during those years his team won approximately 125 games. In 1938, he took EHS to the state championship and won, ending with a 12-0-1 season. He also guided the Cyclones to six conference titles and was inducted into the 1988 Northeast Tennessee Hall of Fame, as well as the EHS Sports Hall of Fame. Sadly, Brown passed away just 17 days before the dedication ceremony to add his name to the stadium, Merritt said in his book.
The field nestled inside of Brown-Childress Stadium would be the last portion of the facility to be named. It was given the name David Rider Field, named for Dave Rider, who coached at EHS from 1976 until 1988 and 1990 to 1999. He is also the grandfather of Witten, the Cyclones’ current head football coach.
“I think it was one of the greatest things that has ever happened to me in sports,” Rider said. “Having a field named after you, is just something you dream about.”
Over the years, ’Betsy has battled in many big games at Brown-Childress – especially in 1972, when the second-ranked and undefeated Cyclones played No. 1-ranked Tennessee High. Tennessee would win that game and continue on to play in the state championship, but memories from that game have lasted a lifetime for players and fans alike.
In 1982, in front of roughly 10,000 spectators, EHS did pull off the big win – defeating Science Hill 7-0 and going on to win the Big Ten.
Brown-Childress was packed again in 1988, when the Cyclones gave Science Hill another beating, coming out with a 20-14 win. With so many people at the stadium during the ’82 and ’88 games, fans filled the sidelines of the field and were standing all the way back at the fences to watch the games.
Other notable games include the 1997 face-off against the Maryville Rebels in the state semi-finals, and in 1999 – now-Dallas Cowboys tight end Jason Witten’s senior year – the Cyclones hosted Knox Central at Brown-Childress in another semi-final.
More recently in 2012, ’Betsy narrowly lost, 44-34, to Christian Academy of Knoxville during postseason play.
Players and coaches come and go, as do the cement and metal fortresses they defend. But as EHS moves forward, building its new stadium, the memories from Dave Rider Field at Brown-Childress Stadium will remain forever for the individuals who have triumphed on its green gridiron, and for the fans who cheered them on.