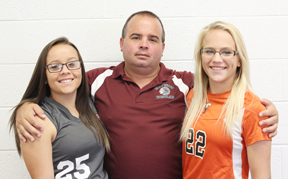 For generations the Carter County clash of Elizabethton and Happy Valley have divided a city, but it has done little to divide the household of the Morrells.

Happy Valley soccer and wrestling coach Eddie Morrell has a daughter attending each school, with senior Jordan at Elizabethon and sophomore Courtney at Happy Valley. Having the distinction as coach and father, he’s been able to witness the rivalry but also the friendship first hand.

“What I’ve been able to get from this is a spirit in a sense of cooperation amongst two school systems that don’t get enough chances to display it,” Morrell said. “When these two teams are on the field there is no animosity between them.”

It was a ceremonious Friday night as the Elizabethton Cyclones said farewell to Dave Rider Field at Brown-Childress Stadium and... read more