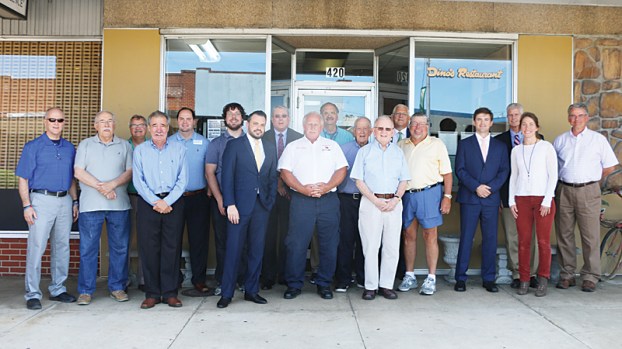 Star Photo/Bryce Phillips The Elizabethton Kiwanis Club meets every Tuesday at Dino's Resturant in downtown Elizabethton. The Club is in its 90th year of service to the local community.

Editors note: This is the first in a series of articles that will highlight some of the local civic groups in the Elizabethton and Carter County area.

Every Tuesday, the men and women of the Elizabethton Kiwanis Club meet at Dinos in downtown Elizabethton.

And after roughly 90 years of existence, the club still holds fast to its mission of supporting and creating opportunities for local children.

“This is the 90th anniversary of this particular club,” said Tyler Fleming, who is in his first year as club president. “We are very proud of the accomplishment that this club has been around for that long. It has sustained solid membership numbers for all those years.”

Throughout the year, the Elizabethton Kiwanis Club holds events and activities that work as fundraisers for various organizations and programs that benefit kids in Elizabethton and Carter County.

“Our motto is, ‘Do the best we can for the children,’’’ said Fleming. “A lot of our efforts are centered around activities with children in the community.”

One of the more long running events is the Annual Pancake Day that has been in action for more than 50 years. The club also holds a yearly Chili Dinner which was first held in 2016.

Along with the monetary contributions, the club and its members put in volunteer hours to many organizations and events in the area which includes but not limited to the Boys and Girls Club, Cap the Gap, Unaka Key Club, Imagination Library, Special Needs Picnic, and the K-Kids program at Harold McCormick, West Side Elementary, and East Side Elementary.

“Year round, we stay busy being involved in the community,” said Fleming.

On its roster, the Club currently has 27 members that come from different sectors of the community. Including Fleming, the 2017-18 Club Officers are President Elect Kelly Geagley, Vice President Bekah Price, Secretary Bill Fryar, Treasurer Jared Tetrick, and Immediate Past President David Leveau.

Fleming said the Club is always looking for new members and recommended that anyone who wants to be involved in the community to join.

“I think it is a great opportunity for anybody who is civic minded,” said Fleming. “We are very active and there is a lot of camaraderie among the club members. We always have a great time together, and we are a very close-knit group and do a lot of good in the community.”

Anyone who is interested in joining the Elizabethton Kiwanis Club is encouraged to swing by one of the club’s meetings that are held every Tuesday at noon at Dino’s Restaurant in downtown Elizabethton.

“Come by on Tuesday, and we will welcome you and we will explain to you the membership process,” said Fleming.

“My music covers faith, family, and the Flag.” Those were the words Grammy Award-winning artist Billy Dean used to describe... read more