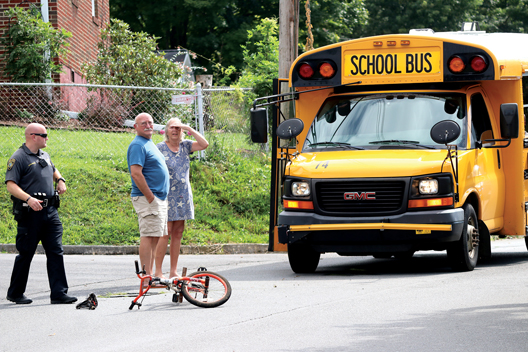 Star Photo/Delaney Scalf An accident involving a Carter County School Bus and a child on a bike sent the child to a local hospital with minor injuries according to Carter County Director of Schools Tracy McAbee.

Bus-bicycle accident sends a local child to the hospital﻿

An after school accident involving a child on a bicycle and a Carter County School Bus sent the child to a local hospital with minor injuries.
According to Carter County Director of Schools Tracy McAbee, the child lost control of the bicycle and pulled in front of the bus at the intersection of Trudy Street and Cedar Avenue.
Upon impact, the driver – despite being shaken reacted quickly to avert a tragic situation McAbee added.
The injured child is not a student of the Carter County School System McAbee said.
Further details were unavailable at the scene as the accident was being investigated by the Elizabethton Police Department.
You Might Like

What is it that makes you smile? Is it looking out the window of your home or vehicle and seeing... read more