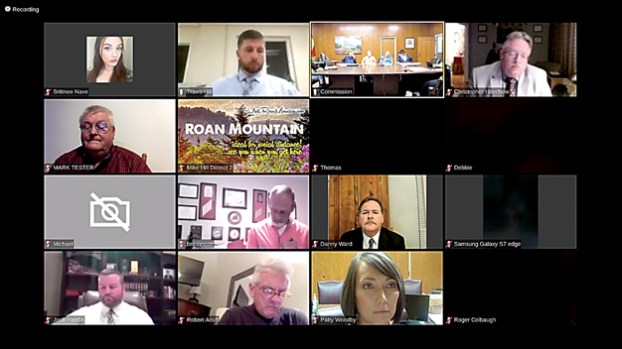 Brittnee Nave/Star Photo The special called meeting took place via ZOOM due to public safety during the COVID-19 pandemic on Monday evening.

Patty Woodby is now the official Mayor of Carter County.
A special called meeting for the appointment of Carter County Mayor took place on Monday evening via ZOOM. The meeting was also live on Youtube. In this meeting, commissioners would vote from several candidates on who would serve out the rest of the late Mayor Barnett’s term (two years).
Prior to the meeting, the following individuals had signed up for the mayoral position: Devon Buck, Mike Ensor, Christopher Hitechew, David Miller, John Papantoniou, Danny Ward and Patty Woodby.
Each candidate took a few moments to introduce themselves before commissioners nominated candidates who would be voted on for mayor. Once nominees were selected, five individuals remained. These individuals included: Patty Woodby, Mike Ensor, Chris Hitechew, Danny Ward and David Miller.
Nominees were given questions organized by both the local Republican and Democratic parties, as well as commissioners on behalf of the community.
Local parties were the first to have their questions asked, which had been submitted and selected in no set order prior to the meeting. County Attorney Josh Hardin presented the questions, which consisted of five in total. Questions included topics like masking, bringing jobs to Carter County, the environment and tourism, enticing young people to stay local, and how they would achieve their goals in the term’s limited amount of time. Each candidate answered the five questions.
Answers on the topic of masking contained a general consensus of listening to the experts, leading by example, appealing to the public and mandating. On the topic of jobs, answers ranged from education being the beginning solution to caring for current businesses to infrastructure. All candidates supported environmental tourism, however also wanted to see protection to the natural resources and embracing new economies it could bring. Enticing young people to stay was centered around showcasing local possibilities, CTE classes and ongoing work with institutions like Northeast and TCAT, as well as more opportunities to work early.
The final question led to more diverse answers centered around how one would reach goal achievement.
Woodby considered herself “already there” in adaptability, noting her two month head start as Interim Mayor and work she has already begun. Ensor spoke on meeting with all department heads, hitting the ground running and attending every meeting. Hitechew spoke on connections and communications with others, as well as building a trust. Miller spoke on working with everyone as a team and establishing plans, as well as the skill of multitasking. Lastly, Ward said he would be ready tomorrow, he has been ready for years and wanted to continue Mayor Barnett’s work.
Commissioner questions followed. Commissioners who did ask questions centered around topics like issues in the community, achievable goals, ethics, animal control, and even the size of the commission. While answers varied, a general consensus was on doing what is best for the community and teamwork.
After the Q & A portion of the meeting, it was time to vote.
Woodby won with 16 votes.
“I want to say thank you to everyone. I’m at a loss for words and that’s not usual,” Woodby exclaimed. “I’m going to do my best and I’m going to give 110 percent to this. I appreciate all the candidates tonight. I would also still appreciate all of your input and collaboration as I go through this process.”

BY IVAN SANDERS STAR STAFF ivan.sanders@elizabethton.com ﻿﻿ The old saying is that the early bird catches the worm and for... read more