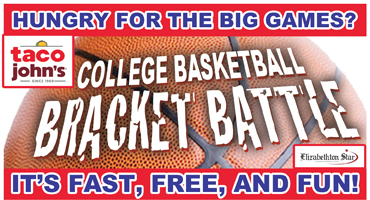 March Madness is upon us, and the NCAA Tournament is shaping up to be a fun one. If you’re like us, you likely participate in one or more bracket contests, doing your dead-level best to pick as many winners as possible in the 68-team event. And if you’re like us, that bracket is usually a mess after the first round, with many more misses than makes, leaving you out of contention for the grand prize.

The Elizabethton Star has some good news. In a twist on our annual bracket contest, readers this year can participate in our 3 in 1 College Basketball Challenge, courtesy of Taco Johns. After the first two rounds, a new, second contest will begin for the Sweet 16, with every contestant getting the chance to pick again, regardless of how you did in the first two rounds. And, finally, there will be a third contest once the Final Four is set.

The goal is to keep participants engaged throughout the tournament, and we hope you like it. Shortly after the 64-team field is announced Sunday evening, our bracket contest will go live at elizabethton.com/contests. We encourage you to register and make your picks before the first games are played next Friday.

In another exciting addition this year, we’ve joined a network of other media outlets across the country to offer a $1 million prize to any contestant who picks a perfect bracket from the Round of 64 to the championship game next month. Other national prizes include a PlayStation 5 and gift cards.

A $50 Visa Gift Card will be awarded to the winners of the second and third phases of our 3 in 1 Challenge.

Picks must be submitted by 10:45 a.m. next Friday, before the first-round games begin. Again, if your picks bomb out in the first two rounds, don’t worry — you can pick a fresh bracket beginning with the Sweet 16 and Final Four, with new prizes for each reset.

Besides competing against people in Elizabethton and across the country, you can also set up groups among friends or colleagues to see who can pick the best bracket. So if you want to pick a bracket based on who has the cooler mascot or uniforms, go right ahead. It’s all free, and mostly for fun. Have fun and good luck!