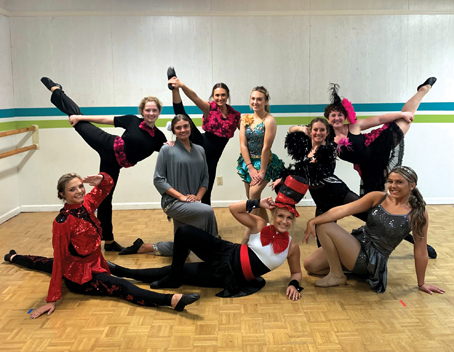 Photo Contributed The Watts Dance Studio Showcase Dancers will be performing Friends in the Universe during the First Friday celebration.

See the classic story told by the Cat in the Hat of Horton’s quest to save the “Whos” while the characters of the Jungle of Newel think he is “out of his mind.” Horton hears a noise from a speck of dust and struggles to learn about this tiny community.

He meets a cast of characters along the way and they all find their place in the world. The show will feature a variety of dances and numbers.

This FREE performance will be offered in the Bonnie Kate Theater Park area on Sycamore Street on Friday, May 7, at 5 p.m. The performance is a part of the Elizabethton Chamber of Commerce’s First Friday celebration.

“Friends in the Universe” is the 31st installment in the continuing Watts Dance Studio series bringing arts into the community.

Watts Dance Studio is home to the Showcase Dancers. They are an auditioned group of performers seen regularly throughout the area.

The Showcase Dancers have performed for the Nassau Independence Day Celebration in the Bahamas and were featured in shows onboard Premier Cruise Line’s Big Red Boat and Carnival’s Fantasy, performed multiple times in Walt Disney’s Magic Kingdom, and performed with the Moscow Ballet.

Members of the group also travel regionally and nationally studying with nationally recognized instructors and choreographers from the east coast to the west coast. Watts Dance Studio has provided dance instruction in all forms of dance since 1952.