Star Photo/Robin Johnson State Senator Rusty Crowe is pictured with a proclamation he passed in honor of Robert H. “Bob” Robinson, who has distinguished himself as a journalist, reporter, and citizen.

The Tennessee State Senate at the request of State Senator Rusty Crowe (Third District) has passed a proclamation in honor of Robert H. “Bob” Robinson, who has distinguished himself as a journalist, reporter, and citizen.
Robinson, the son of the late Sen. Herman Robinson, after graduating from Elizabethton High School in 1961, worked as a correspondent for the Knoxville Journal, the Associated Press, and WCYB-TV. He graduated from the University of Tennessee with a double major in print and broadcast journalism and a minor in political science. He was the university’s first journalism graduate with a double major in print and broadcast journalism.
While at UT, Robinson served in the university’s ROTC Program as a Technical Sergeant and at the Senior Awards Day Ceremony as a sophomore he was presented the General Dynamics Award as the Outstanding Sophomore.
He was also a walk-on member of the Tennessee Volunteers football team in 1961 and 1962.
While attending the Nashville School of Law he worked for GTE and during his second year of law school accepted a job promotion and was transferred to GTE World Headquarters in Irving, Texas. While working with GTE, Robinson held various positions, including director of government affairs for GTE Long Distance and manager of a $1 million internet-in-the-classroom project in the Great Lakes Station. He was also the designated meeting planner for GTE government affairs executives and senior staff who attended national meetings of legislators and regulatory utility commissioners.
Robinson through the years has served in various leadership roles at the local, state, and federal levels as a volunteer, promoting employment of people with disabilities prior to the passage of the Americans with Disabilities Act in 1990. He also served a nine-year term on the President’s Committee on Employment of People with Disabilities under Presidents Ronald Reagan and George H.W. Bush.
Robinson’s father, Herman, suffered from cerebral palsy from birth.
During his employment with GTE, Robinson earned several honors, among them the GTE President’s Silver Leadership Award. He also served as chairman of the Telecommunications Task Force of the American Legislative Exchange Council.
Prior to his retirement in 2002 and after nearly three decades of service with GTE and more than 50 years in his professional career, Robinson was appointed to the GTE/Bell Atlantic merger approval team, where he coordinated responses to the merger approval.
Since his retirement, he has lived in Elizabethton and worked part-time with the Herman Robinson Vocational School, now known as the Tennessee School of Applied Technology.
Robinson was also active in the establishment and fundraising part of the Elizabethton-Carter County Veterans War Memorial and the Veterans Walk of Honor.
Robinson upon receiving the honor said he was honored, and through his work had met a lot of nice people. “I received a lot of support from my co-workers, the community, and people in leadership. I appreciate the honor. I appreciate Sen. Crowe, who was also a friend of my dad and uncle, Frank Robinson. I appreciate the recognition. It has been a pleasure to work with so many wonderful people through the years and to have had the opportunity to travel. One good deed brought another,” said Robinson from his home this week.
Robinson is now limited in his work and civic activities due to health issues and spends much of his time at home.
Sen. Crowe said it was indeed an honor to call Robinson his friend and to accord the honor of a Senate Proclamation. “He has served his community well and has had so many achievements. He is very deserving and is one of Elizabethton’s finest, and I know his father, Sen. Herman Robinson, who for many years held the seat I now hold, would be very proud of his son and his many accomplishments.” 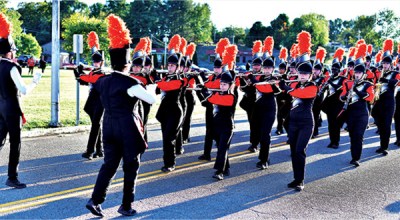