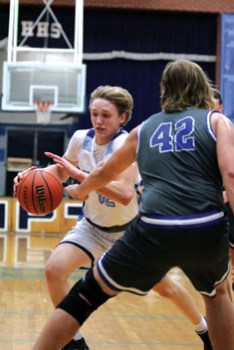 Photo by Brenda Henry Hampton's Dalton Holtsclaw pushes the basketball forward while being closely guarded by a Unicoi Co. defender. 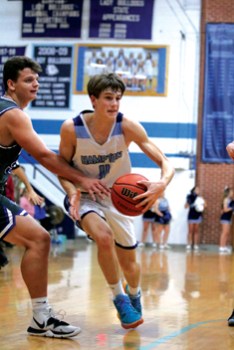 Photo by Brenda Henry The Bulldogs Cadon Buckles drives toward the paint with the basketball. 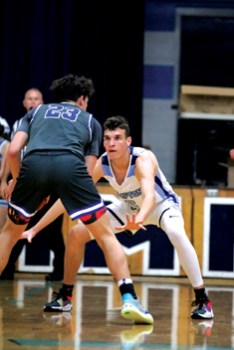 Photo by Brenda Henry Michael Harrison is zoned in while defending a Unicoi Co. ball handler. 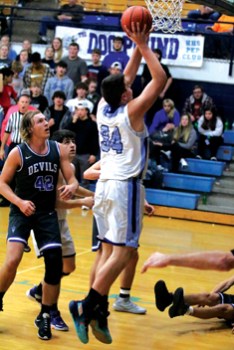 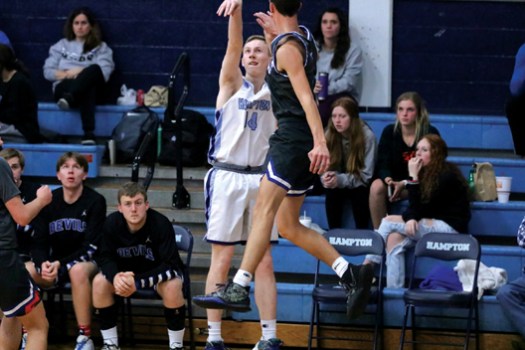 Photo by Brenda Henry Logan Whitehead puts up a jumper over the outstretched hand of a Blue Devil defender.

FROM STAFF REPORTS
It didn’t take long for some of the Bulldog basketball players to go from one big game on the gridiron to one on the hardwood as Coach Ned Smith had his full squad back for a tough game with the Unicoi Co. Blue Devils.
In a game where it took an extra session to determine a winner, the Bulldogs came out on top in a high-scoring affair taking a 88-86 victory.
Hampton worked out to a halftime advantage of 37-33 lead over their visitors behind nine points from Conor Burleson. Michael Harrison added eight with two treys included.
Cadon Buckles and Logan Whitehead knocked down six points apiece in the first 16 minutes of play.
Lucas Slagle paced the Blue Devils in the opening half with 13 points. Eli Johnson added seven points to keep Unicoi Co. in contention.
The second half saw the Blue Devils come roaring back after the break to outscore Hampton 39-35 behind the hot hand of Johnson who torched the nets for 17 second-half points including four treys.
Grant Hensley who was quite in the first half also caught fire with 15 in the second half of action.
Burleson made sure to do his best to not let the win slip away as the Hampton big man added 10 to his scoring column in the second half going 6-of-8 from the charity stripe during the half.
Harrison also added seven points to his tally.
In the overtime session, the ‘Dogs managed to nudge just ahead to take the victory outdueling the Blue Devils 16-14 in the session.
Harrison scored seven in the session to help carry his team to the win as he finished with a team-high 22 points in the victory. Burleson finished his night just one point behind Harrison collecting 21 points. Dalton Holtsclaw and Whitehead also finished in double figures for the ‘Dogs recording 13 and 12 respectively.
Three players scored 20 points or better for the Blue Devils including Johnson who finished with a game-high 29 points. Hensley closed out his night with 24 while Slagle pitched in with 20 points.
—
Hampton, 88-86 OT
Hampton (88)
Michael Harrison 22, Isaiah McCoury 3, Cadon Buckles 9, Dalton Holtsclaw 13, Logan Whitehead 12, Morgan Lyons 5, Conor Burleson 21, Hayden Campbell 3.
Unicoi Co. (86)
Ty Johnson 5, Grant Hensley 24, Eli Johnson 29, Lucas Slagle 20, Caleb Swinehart 8.
Unicoi Co. …… 21  12  17  22  14 – 86
Hampton ……. 26  11  16  19  16 – 88