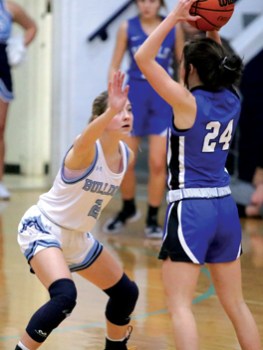 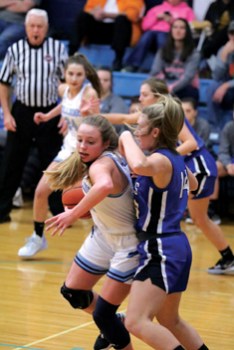 Photo by Brenda Henry Brenna Davis works to get around a Lady Blue Devil defender. 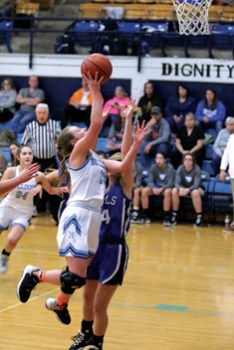 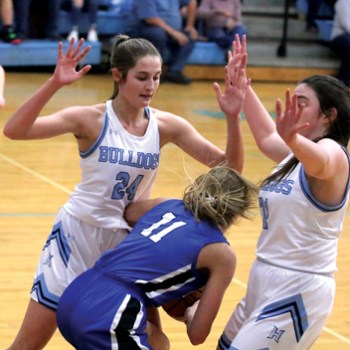 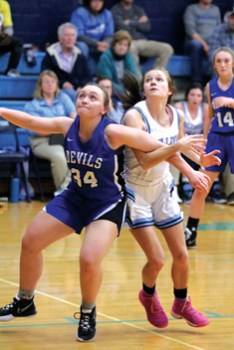 Photo by Brenda Henry A Hampton Lady Bulldog tries to push a Lady Blue Devil out of the way so she has a path to the rebound. 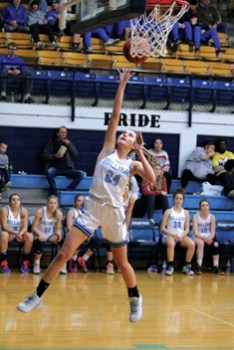 Photo by Brenda Henry Linsey Jenkins glides in for an easy two points against Unicoi Co.. 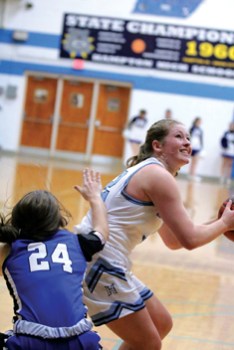 Photo by Brenda Henry Lacy Henry prepares to go up with a strong shot against the Unicoi Co. pressure. 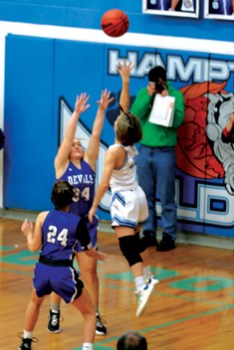 FROM STAFF REPORTS
If the Hampton Lady Bulldogs continue to play down the late stretch as they have in the early part of their season, teams might find it difficult to pick up a win against head coach Brandon Carpenter’s squad.
The Lady ‘Dogs hammered visiting Unicoi Co. by a score of 77-54 in their latest contest as three players hit for double figures in scoring in the game led by Macy Henry who gunned in 25 points in the win.
Hampton jumped up by 10 points at the half on the heels of nine first-half points by Henry and eight by Linsey Jenkins. Madison McClain chipped in with six points while Breanna Davis and Taylor Berry contributed with five points apiece.
Hannah Shelton and Laurel Osborne scored five points each to keep the Lady Blue Devils within an arm’s reach in the contest.
Hampton extended the halftime lead in the third quarter to 55-37 as Henry added eight more to her scoring column collecting a basket and hitting 6-of-7 from the charity stripe. Jenkins added four and Berry three to help build the advantage.
The Lady ‘Dogs outscored Unicoi Co. 25-17 in the final eight minutes of play to seal the victory.
Lacey Smith hit two treys in the quarter and as a team, Hampton hit 11-of-17 from the foul line in the quarter.
Jenkins finished the game with 12 and McClain 10 for Hampton.
Faith Bennett finished with 14 points to pace the Lady Blue Devils while Shelton finished her night in double figures with 12.
—
Hampton, 77-54
Hampton (77)
Macy Henry 25, Breanna Davis 5, Piper Helle 8, Linsey Jenkins 12, Ryleigh Nickles 3, Taylor Berry 8, Madi McClain 10, Lacey Smith 6.
Unicoi Co. (54)
Haley Rush 3, Hannah Shelton 12, Jocelyn Metcalf 6, Marissa Soulier 4, Abigail Rush 3, Laurel Osborne 7, Faith Bennett 14, Bella Sams 1, Olivia Bailey 4.
Unicoi Co. ….. 10 16 11 17 – 54
Hampton …… 13 23 19 25 – 77