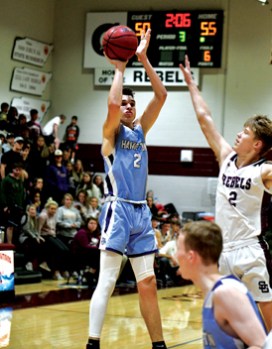 FROM STAFF REPORTS
A day after taking the defending state champion Clay County down to the wire, the Hampton Bulldogs were looking to get back on track against another solid opponent in Jackson County.

Leading by one point with five seconds remaining, Jackson County worked the ball into position and hit a trey with three seconds to play to take a hard-fought 61-59 over the ‘Dogs.

It was Jackson Co. that took the upper hand early taking a 27-20 lead at the break.

Tre Monette led the Jackson Co. charge in the half hitting for 12 points. Jordan Arroyo chipped in with seven to build the lead.

Hampton, meanwhile, received six points each from Dalton Holtsclaw and Michael Harrison as Harrison’s came by way of two treys.

By the end of the third quarter, the ‘Dogs whittled that lead down to 39-38 behind two more treys and a deuce from Harrison adding eight to his total. Cadon Buckles and Conor Burleson added three points each in the rally.

The Bulldogs did take the lead before the dagger came before the horn sounded.

Harrison recorded 17 points for the contest while Holtsclaw dropped in a dozen. Burleson and Buckles finished with nine points apiece.

Burleson led in rebounding for Hampton with five while Holtsclaw collected four while also dishing out three assists.

Monette finished with 21 and Arrroyo18 to lead Jackson Co. to the victory.