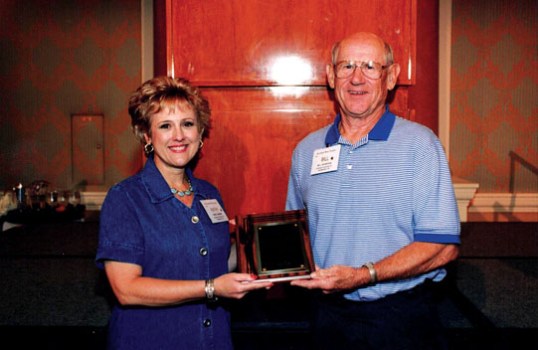 Photo Contributed Mr. Armstrong pictured with former Credit Union CEO Kathy Campbell as he receives the National Director of the Year award in 1998. 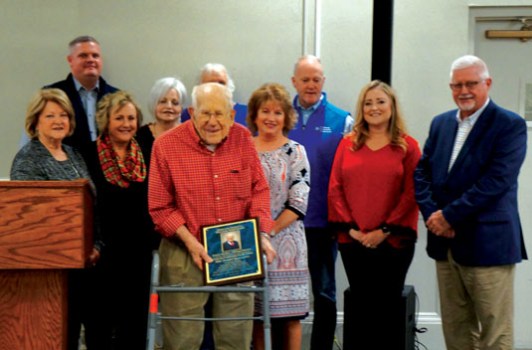 FROM STAFF REPORTS
William “Bill” Armstrong, at 92 years young, was recently recognized with the Director Emeritus award for his service at
Northeast Community Credit Union. Armstrong has been a motivating inspiration at the Credit Union for 70 years.

He, along with some other local educators, filed a petition in October 1952 with Tennessee Department of Financial Institutions to charter Elizabethton Teachers Credit Union.

“In 1952 educators often found it hard to borrow money due to not receiving a year-round paycheck. Many lenders considered it risky since we didn’t get paid during summer months,” Armstrong said.

Each of the Credit Union’s initial charter members deposited $5 which was (and is today) the value of one share of “ownership” to start the Credit Union. As a financial not-for-profit cooperative, the Credit Union operated by pooling resources of depositors to make small loans to its “members”, those who choose to use credit union financial services.

He recalls that the first credit union loan was for a teacher to buy an appliance that was desperately needed.

“That first loan was small, but it showed us how well the credit union model worked to help others; I was excited to be part of that,” stated Armstrong.

Later, the Credit Union changed its name to Northeast Community Credit Union to better reflect its availability to all residents of Carter and surrounding counties in addition to schoolteachers. Armstrong served as Credit Union Board Chairman during several years of explosive growth and helped lead the way to an expansion of credit union products and services.

He has served as Chairman of the Board of Directors, Vice Chairman, Credit Committee member and Supervisory Committee member. In 1998, Armstrong was chosen from volunteers in over 11,000 credit unions nationwide as “National Director of the Year.”

This prestigious award seeks to “honor the volunteer who demonstrates the spirit of the credit union movement of people helping people.”

Kathy Campbell, former Credit Union President and CEO, says, “I’ve been privileged to work for him and with him for the last 40 years and in all that time, I have never heard him say an unkind word about anyone. His kind heart and compassionate ways set him apart and inspire us all.”

Under Armstrong’s leadership, the Credit Union has grown from $5 deposits and a single appliance loan, to over $150 million in deposits, $177 million in assets, more than 3000 loans on the books with locations in Elizabethton, Roan Mountain, and Johnson City.

Teresa C. Arnold, current Credit Union President/CEO, stated, “I think it’s his wisdom and kindness that stand out the most. I’ve known him for nearly 30 years and I have so much love and respect for him. It’s obvious he puts a lot of thought into every decision, and he’s always thinking about what’s best for other people. We are so blessed to have him as a driving force in our Credit Union and our community.”

In addition to his work with Northeast Community Credit Union, Armstrong has contributed to his community as a school teacher and principal (including “2010 Educator of the Year”), a member of the County Commission, Planning Committee, Parks and Recreation Committee, Nominating Committee, Finance Committee, and Education Committee.

He was a Board Member for the Main Street organization, co-chairman for the State of Tennessee Bicentennial Celebration, Board Chairman for Senior Citizens and served on the First Tennessee Human Resource Agency’s Vision Council.

Armstrong has participated in the Senior Citizens State Games of Tennessee in tennis and has won gold, silver, and bronze medals in the sport. He served as Signalman aboard Landing Craft Infantry vessels in the Pacific during his military service and is a member of First United Methodist Church.