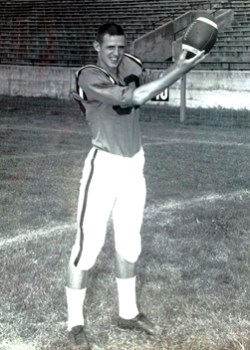 Photo Contributed Sam Bradshaw during his football playing days as an Elizabethton Cyclone. 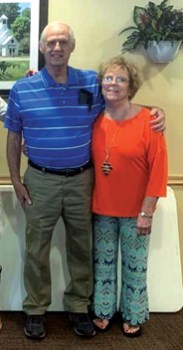 BY C.Y. PETERS
One of the friendliest men you will ever meet is a longtime legend in East Tennessee Sports – Sam Bradshaw. Bradshaw played varsity football for the Elizabethton Cyclones from 1957-1959 and was a three-year defensive stand-out. He was the Cyclones key receiver his junior and senior seasons.

Bradshaw played on both sides of the ball, making Honorable Mention All Big-Seven Conference team both as a junior and a senior. He also played basketball for the Cyclones from 1958-1959.

In baseball, he was a starting outfielder as a junior for the Cyclones baseball team helping them to a second-place finish in the Big Seven and winning the District 3 tournament championship.

He was an All Big-Seven outfielder as a senior (1960) with a regular-season batting average of .286. Sam played in the Virginia-Tennessee All-Star game in 1960 coached by Tom Pugh who just recently passed away.

Buck Van Huss tried to get Bradshaw to come to Hampton to play basketball for him, but he loved baseball.

Bradshaw enlisted in the Army National Guard and would marry his high school sweetheart, Jeannette Fox, in 1962. They had three daughters and Bradshaw would say he was always out-voted 4-1.

He went on to play fast-pitch softball and was the top first baseman in East Tennessee. He hit one of the longest hits at Canton off of one of the best pitchers in Tennessee.

“I couldn’t throw one by him,” said fast-pitch pitcher Jarfly Dugger. “We became great friends when we started playing together on the same team. We had Jimmy Ensor in the outfield, Scotty Bunton behind the plate, Doc Lowery at second, Wes Holly at third, Willie Malone at short, and the best first baseman ever Sam Bradshaw at first. He was the best teammate you could ever have,” said Dugger.

“Although dad is always remembered as a stand out athlete, one of the “fence crew” when Coach Rider came to EHS ( and had no sons) and a season football ticket holder for close to 60 years, his greatest accomplishment was being the best dad three girls could ever have,” said Dianna Bradshaw Hyatt. “His friends would always rib him about having girls but he always said that’s okay, I’ve got my own cheerleaders and trust me, we got plenty of atta girls!!

“We grew up in a wonderful home filled with love; we ate supper together every night and went to church every Sunday. You can’t talk about Dad without talking about mom. They are a team! Dad and mom always lead by example and taught us to treat others with kindness. They also made each of us feel special in our own way and that carries on with the grandchildren and great grandchildren, who love their poppy and nanny.”

Bradshaw worked at Beaunit for ten years before starting his own uniform business which he continued nearly 40 years until his retirement. Sam use to fish and hunt but now he spends most of his time with his grandkids and great grandkids. Sam was inducted into the Carter County Sports Hall of Fame and the Elizabethton High School sports Hall of Fame. 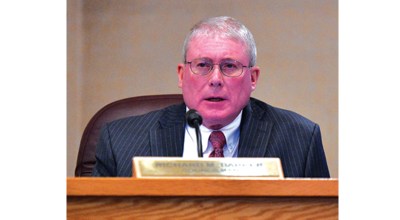 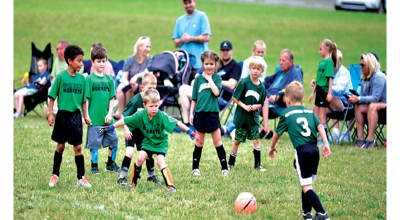