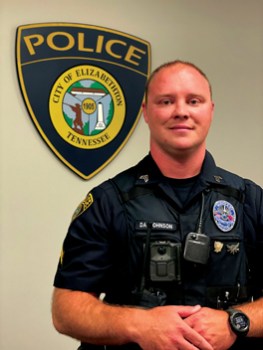 Photo Contributed David Johnson has been promoted to Elizabethton Police Department Sergeant. He was sworn in on Tuesday at Elizabethton City Hall.

The Elizabethton Police Department promoted David Johnson to sergeant after he received the top score in the department’s recent promotional process.

Johnson was sworn in on Tuesday in the City Council Chambers at Elizabethton City Hall.

The new sergeant has been an officer at the EPD since 2015. Johnson has worked on a patrol shift and the traffic unit and is also a member of the Specialized Traffic Accident Reconstruction Team and the Special Response Team.

Johnson is a graduate of Happy Valley High School, has an associate’s degree from Northeast State Community College, and a bachelor’s degree from East Tennessee State University.