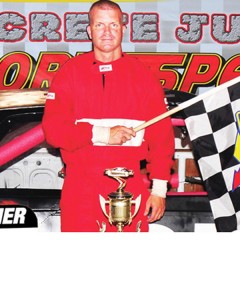 Deese, an Elizabethton police officer, took up the sport in the footsteps of his father Dennis, who runs in the Street Stock classification, and he has been running well in the early going.

Deese has had two first-place finishes to go with a pair of second- and three third-place showings thus far. He runs at Lonesome Pines in Virginia as well, as both tracks are owned by the same company.

“Last weekend we finished third,” Deese said. “It looks like we’ll be rained out today and we then have a week off, but the race will be made up in August. It was a great feeling winning my first checkered flag considering it’s a NASCAR sanctioned race. It was great to see the fans and my friends and family after I won.

“There is no feeling like when you climb out of that race car.”

Pure-4 classification is stock four-cylinder car racing and Deese runs in a 1986 Honda Prelude. Stock means that the frame and engine cannot be modified or ‘souped up’ but the suspension and body of the car may be modified.

Originally from Live Oak Florida, Deese moved to Carter County in 1992 and attended Hunter Elementary and Unaka High School. His father was pastor at Hunter First Baptist for a time.

“My dad used to race 25 years ago, and he has gotten back into it in stock car,” Deese said. “It was my dad that first got me interested in racing. If it wasn’t for him, I wouldn’t have the car I have right now. He has given me a lot of support.”

Deese is a full time student at Bethel University and is looking at receiving his Bachelor’s Degree in Criminal Law. He would eventually like to get his Masters and become a professor, but for now he has his plate full with work, school, family life and racing.

He has two children, Caleb and Belah, and is engaged to Lydia Wismer and they have a third child on the way.

“He could be arriving at any minute,” Deese said.

For now he has set some lofty goals for himself and given his body of work so far no one could call them far fetched.

“My goal is to win the championship and rookie of the year,” Deese said. “That’s my goal. I accomplished one of my goals I set by winning a race, so that was one of them. My long-term goal is to hopefully get picked up by one of the late model teams that run at Kingsport.”

Deese confronted his first wreck in a race four weeks ago and has been working the car back into shape over the last few races.

“We have run down in the standings the last few races,” Deese commented. “We finished seventh or so and it has taken a little while to get the car back to where it was at the start of the season.

“That third-place finish last week makes me feel like we are getting the car back into shape.”

Deese is sponsored by Fan the Flame Ministry, Advance Auto Parts and Tyler’s Barber Shop and said he wanted to give a shout out to John Ketron.

“He has helped me out with driving and he runs in Pure-4,” he said. “Not the Rookie Pure-4 but the veterans. He is from K&K Auto and he has gone to practices with me and my dad.

“He was on the mic talking into my headset and has given me a lot of pointers.”

Deese goes back on the track on August 1st at Kingsport Speedway with seven races left to go.